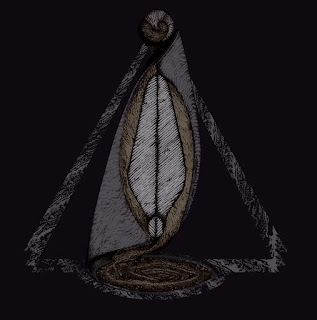 Many people were awaiting this first Dephsphorus LP (called Night Sky Transform and released this august on vinyl by 7 degrees records. Also available as digital download). Because we knew with Axiom in 2011, and more recently with the splits with Wake and with Great falls, that this Greek band offers some high quality extreme metal and has something like a "supplément d'âme". Dephosphorus music escapes labels but I would describe it as a blend of something like Norwegian and French black metal for the main part but with also influences from Slayer (some riffs and some drumming parts), post-hardcore, crustgrind and noise rock. The vocals, going from black/death to powerviolence are great, with diversity and a good rhythm (there are also spoken parts on two songs and a part by Ryan Lipsky from Unearthly trance). Same can be said about the guitar and drumming parts :  quality, diversity and personality. The songs are cleverly crafted and efficiently played. The lyrics, like on the previous records, are different from most metal bands, the issues covered are more "spiritual", about the universe, humanity etc. The progression since Axiom is mostly in the production which clearly improved and in some songs adding more diversity (some slower, atmospheric, "post" parts, the spoken parts, etc,. for ex the song called The Fermi paradox).
I was expecting something very good from Dephosphorus and I'm happy to say that I'm not disappointed.

Listen to it and make your own opinion on their Bandcamp page.

Panos & Thanos from from Dephosphorus answered to a few questions I asked them about Night sky transform, read it below. You can also read this other interview, with the same Panos, that we did in March (going with a review of Axiom, their first record).

-how would you describe the move from Axiom to Night sky transform, for the band and for the music ?

Thanos: To me it’s a natural progression and yet, I know that a lot of people cannot get it. I think the fact that we had to record everything in a small period of time, made it sound more raw and tight and considering it as a whole, it works in the end. We focused this time more in the atmosphere of the songs along with the roughness of the material. As the time goes by we become tighter as a musical trio, so I assume this works well for the transition.

-how was Night sky transform recorded and produced?

Thanos: We recorded in almost 9 days pretty much everything at Northside Studio (http://www.northside.gr) of our friend’s Miltos Schimatariotis. While we didn’t have much time to experiment more with alternate sounds and techniques, the studio had this essential cosy atmosphere which enabled us to work harder, without having to think about the drawbacks. Back at this time I was serving my military service, so it took some time to mix the recording but Miltos did an exceptional job and found the appropriate ‘color’ for the album, so all kudos to him. We financed the recording, mixing and mastering of the album along with the artwork and 7 Degrees Records printed the wax. Production is also who is financing for the album, so I guess that makes us the producers.

-one thing new in Night sky transform is the slower parts with spoken words. Was the purpose to give, with The Fermi paradox, a kind of “breathing space” in the middle of the album and with Aurora to end the album on a mysterious note?

Panos: It’s not something that we plan. It’s the music that takes us there. We’ve been experimenting with clean vocals and spoken words since our early days before any of the “Axiom” songs were written, back when me and Thanos were doing home demos on our own without a drummer.

The way it goes is that when a new song’s music is (semi-) ready, I browse through my notepads and start figuring out which  lyrics and vocal lines will fit. From time to time a clean vocal line will occur in my mind and then I try it out. If it blends well with the music, its dynamics and atmosphere, I hold on to it.

In one instance, for the song “Stargazing & Violence” (our side of the split-7”EP with Great Falls), the clean vocal line and its lyrics were there before I figured out the rest…

Concerning the specific songs that you mention, “The Fermi Paradox” is a song that was written by jamming and being a doomy noise rock track, it is in a different register than the rest of our stuff. So, it was obvious that it needed another approach for its vocals and it was Thanos that sung it.

“Aurora” is the album’s closing track. Even when we first rehearsed it, its ritualistic, mystical atmosphere was there and it inspired me to add some clean vocals additionally to the screams. At that early point we didn’t even know it would close the album, so it fits with  what I described earlier: the music and Dephosphorus’ spirit takes us into places.

-some parts, for ex the beginning of Identifying the encapsulator, reminds me of Slayer (some riffs and drumming), is it an influence for you?

Thanos: I can understand the comment, but to me it’s more Arkangel than Slayer! But I can see your point. This song is a combination of Arkangel meets Immolation meets Helmet, so putting everything on the blender you may end up with ‘Identifying the Encapsulator’… Nothing was planned actually, things like that sometimes just happen.

-seems to me that the parts with a “rock” feel, of the noise, post or whatever variety (like in the song Night sky transform), which were already present in Axiom, are now more developed. Do you think it is because more diversity in the songwriting allowed more opportunity for the different musical style you like to shine through the songs?

Thanos: I think it has more to do with the freedom we feel each time we build a song. When we feel it should be like ‘The Fermi Paradox’ or like ‘Aurora’, there is not much to think about it actually. We never spend time thinking if a particular noise rock riff should be there or not. It’s there, so we spend more time to develop it. I think diversity is essential and significant for us, since the music we write is the music we would like to hear from our favorite band, so based on this I spend more time in songwriting with this diversity thing in mind, but without ever letting it being a goal. I think that if it was planned, it would lack this rawness you can feel on the songs.

-looks like you really pay attention to the lyrics and the artwork, as parts of the general atmosphere and meaning you want to push forward with your music. A few words about that?

Panos: Dephosphorus is a concept band. It always was - we started it out as such together with Thanos. The music and the concept/lyrics/aesthetics are intertwined and inseparable. Our ambition is to take you on a trip unlike everything you experienced before, to blow your mind and to excite your imagination. Listen to the music, contemplate the artwork, read the lyrics. Find out if our craft does it for you.

-a few words about the Ryan Lipynsky featuring?

Panos: We’ve been in touch with Ryan for a few years, being early Unearthly Trance enthusiasts and huge Thralldom (R.I.P.) fans. When “Unconscious Excursion” was wrapped up very spontaneously at the studio after only a few takes and without prior rehearsing, it was obvious that it was our way of paying tribute to both bands. In particular, Thanos’ wrote his guitar parts with Ryan’s playing in mind, and he told me straight from the beginning “Dude, it would be cool if we could get Ryan sing on this one”. I was like “Oh man, I wish he would but he’s probably too busy to care doing it”.

After we’ve had the same dialogue for a few times, eventually I thought “Oh fuck it!” and like you French guys say “Qui ne demande rien, n’a rien” (“Whoever demands nothing, gets nothing”). So, I dropped an email to Ryan with the track attached. He got back to me within minutes saying he wanted to do it. And not only he did sing, but he has also plunged into our concept writing the lyrics, and has also played a stellar guitar solo! His contribution has added extra mystical vibes and cosmic aura to the album. All hails to him for that! Make sure you check out his latest works with The Howling Wind and Serpentine Path. Killer stuff!

-now, what is next for Dephosphorus?

Panos: We will release within the next few months both “Night Sky Transform” and “Axiom” on cassette format. We will also consider any interesting offers for CD editions.

On the astral front, we’re working on new, darker material. We have in mind a few different ideas that we want to try out this time. Stay tuned!

-something else to say?

Panos: Thanks so much for the ongoing support through your blogzine, it is appreciated!
“Night Sky Transform” is out on vinyl through 7 Degrees Records. We will have our own copies of the  LP very soon, as well as new t-shirts. You can listen to the full album and buy its digital version via http://dephosphorus.bandcamp.com. If you’re into social notworking, make sure you connect with us at www.facebook.com/dephosphorus.
And never forget: we’re all made out of stardust…