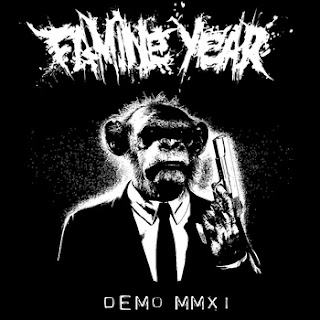 Famine year are a finnish new band playing some really good crust / grind. They released their Demo MMXI two years ago and since they released a split 7' with Hautaus and another 7'.
what I especially like is the rock'nroll vibe that goes through their songs, making it more living, wild and crazy that most crust grind band. this, with the singing in finnish reminds a bit the more rocknroll crust moments of Impaled nazarene. the demo is four cool song plus a cover of Freedumb by NOFX which dosn't sound at all like NOFX, which is ok for me!
I hope they'll soon released a full lenght record as cool as their demo.