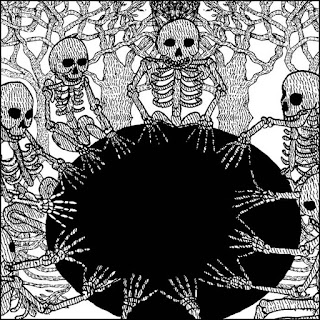 Skullfuck is an awesome free jazz spanish duo (drum & tenor sax). Their new album Day of the black sun is released on Norwegianismrecords, which has nothing to do with Norway but is linked with the band Dead neanderthals from the Netherlands. And if you like Dead neanderthals you'll like Skullfuck. But they are not clones, in fact they often sound closer to afro-american free-jazz than to european free jazz. I mean the drumming has something more primal / tribal (there's even a bit of didgeridoo playing), less abstract, and the sax playing has a more melodic side, and I'd say it has a jazz feel that european free jazz has lost. The trippy / ritualistic feel the album have reminds also a bit John Zorn's Painkiller (but the Zorn influence is less present than on their previous album Catalogue of horrors).There's even some noise / drone parts in the long closing track. Day of the black sun is a very stong album that easily put Skullfuck among the best wild free jazz bands. So far my favourite free jazz album for 2016 and it will be hard to beat.