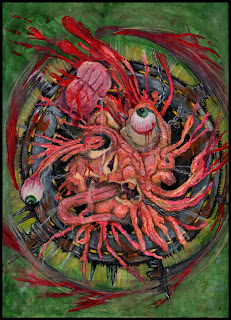 Sonic Poison is a new band from Finland which released a cool cassette (with Caligari records) called Harsh Demonstration, with which they offer a refreshing take on old school grind/death. And that's indeed a harsh demonstration, very raw stuff, I really  enjoyed this short (7 tracks, less than 10 minutes of music) blast of grind in a Repulsion vein, and any grindfreak will probably do the same. Highly recommended!