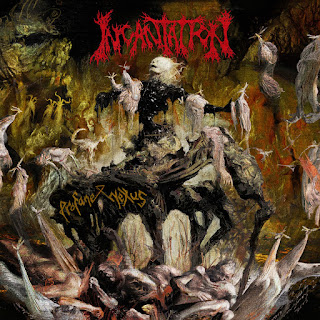 Incantation is one of the oldest death metal bands (starting in 1989), also one of the first to include slow paced death-doom parts. They are also one of the best, and with albums like Profane Nexus, their tenth one, this is not about to change. Old school death metal may have been long ago surpassed by modern death metal in terms of speed, heaviness and technical playing, but with such a mastery of the groove and atmosphere we found in Incantation's songwriting we are sure the old school will stay relevant for a while. Profane Nexus feature the best Incantation can do in excellent riffing and evoking a thick atmosphere of crawling evil, with a variety of rhythm, from blast-beats to mid-tempo to the slower funeral paced doom parts (like in the excellent and very funeral Incorporeal Despair for exemple). Profane Nexus is maybe even better than Dirges of Elysium (released in 2014, already a good album) and anyone into death metal will enjoy it.