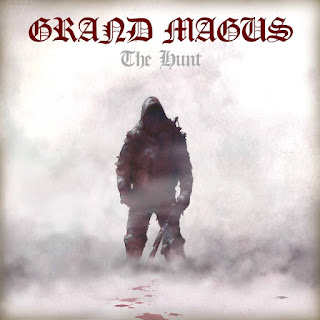 If you like old school rocking heavy metal you probably already know Grand magus. The swedish band once again don't disappoint with The hunt, their fifth record released this may on Nuclear blast records. Grand magus is heavy metal the way Dio and Judas priest were heavy metal, and The hunt is heavy, melodic, epic and mighty. A song like Iron hand could fit nicely in Bristish steel and at the same time Grand magus has a strong personnality and you can recognise one of their song at once. And the powerful and pure class vocals by JB (also guitarist in grand magus) play a large part in that. Of course the arrival of Ludwig Witt (who was with JB in Spiritual beggars) as new drummer wasn't something to slow the progression of the band.
To sum it up The hunt is highly recommended if you're into old school heavy metal. With the King giant record, dismal hollow, it is my favourite heavy metal record for 2012 yet.


and just below you can read JB's answer to my questions about Grand magus and The hunt  (thanks a lot JB!) :

-with The hunt and Ludwig Witt replacing Sebastian Sippola on drums Grand magus starts a new chapter. What can you say about it?

It’s very interesting and like a new beginning. You know when you’re only three people in a band, any changes will have a huge effect on the whole band. Ludwig is obviously a great drummer and the perfect man for the job in Grand Magus, but he’s also really enthusiastic about the whole thing and I think it makes things exciting for Fox and myself too.

-the lyrics seems now to revolve mainly about “Viking times” while it used to touch also more “philosophical” subjects on some songs, is it so?

Yes, they are a combination of both things. Mainly the start is always something emotional, something I feel strongly about, then it takes on different meanings and levels and evolves into something more than just words, you know?

-I like all your records since the first one, but  I’am especially pleased with The hunt which is for me really a peak in the Grand magus discography (the best with maybe Iron will in my opinion). What is your feeling about it and the place of The hunt in the history of the band?

I agree. At the same time, I can’t judge or listen to our albums the same way I can judge and listen to other bands music. All our albums have been the best we could do at a certain point in time and while you get better at your craft, sure things get better and more accomplished, but that doesn’t mean that the older stuff is less powerful or “worthy”.

-I think it’s an influence for you since a long time, but it seems to me that on The hunt a cool “early Judas priest” vibe is more present than ever while keeping the special Grand magus sound and personality. What do you think about it?

I totally agree. That was actually something I really tried to accomplish. That kind of adventurous and sometimes a bit loose feel you would find on STAINED CLASS or SIN AFTER SIN.

-“son of the last breath”  has an intro (and outro) a bit different, how was it written?

Yes… it was like a nightmare journey, haha! It was co-written with Nico who also produced the record and he’s responsible for a lot of the acoustic guitar parts and stuff on that track. The basic melody in the beginning that also is the framework for the cello parts was just a little thing I came up with on the way home from the studio one day. It’s got a strong influence from Scandinavian folk music which is something both me and Fox grew up with. Then you have the riff that is in IRON HAND as well that Fox came up with. It’s like a puzzle.

-how are your recent shows, with the new songs and Ludwig Witt?

They have been great, the new songs work excellent live and Ludwig has been awesome!

-how did you get into metal? What does it represent for you?

Very early. I actually grew up with metal due to my older brothers who were teenagers when I was 3. They listened to Alice Cooper, Deep Purple, Nazareth, Black Sabbath etc. and I heard that stuff from very tender age. For me metal is power, excitement and basically a necessity in my life. I couldn’t imagine a life without it.

-how do you explain the fact that Sweden produce so many good hard rock/metal bands?

I think Swedes in general are quite musical or at least are very interested in music. We like to sing and there’s a strong tradition of music in the country. Another thing is that we are quite good at gathering influences from other countries.

-which new heavy metal band do you like? Which other kind of music do you listen to?

I don’t really listen to any new bands. I listen to the old bands, haha. I still think the old guard that are active does great music. I like a lot of different stuff, but metal is my main diet.

-how do you see the evolution of Grand magus, from the first record until now? Seems to me that bit by bit the “classical heavy metal” influence got more present whereas the “stoner” (or “doom” in Monument) sound of the start faded away?

Yes, I agree. I can’t really add anything to that.

-do you already have ideas or songs or the next record?

No songs yet, haha! We finished the album in March, so it’s a bit too soon, you know? Ideas, yes.

-do you have something to add?

Heavy metal is the law!