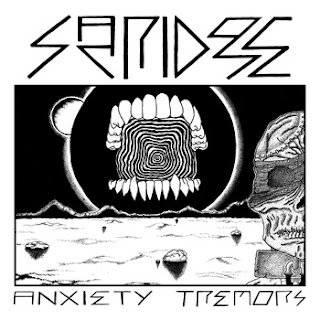 Sacridose is a new band from the USA with the guitarist of Cellgraft (Here are what I posted about Cellgraft, may this excellent band rest in grind!). on their first release called Anxiety tremors Sacridose plays some classic good ol'grind : very short and fast songs, blast beats, shriekings, hardcore or thrash / death riffing. well, grindcore..Sacridose being more on the punk/hardcore than on the death/gore side of grind. it's less strikingly powerfull and special than Cellgraft was in my opinion. but let's not compare the bands, just take Sacridose for what it is : another cool grind band, sharp and fast. just enjoy!

and here's the interview we did by mail :

-how did Sacridose formed, what was the project at the start of the band?

Me and Jaydee had been talking about starting a grind band for a while. On the first Bastard Deceiver tour we went with Radiation from Gainesville, which is how me and Palmer met. He basically did blast beats for two weeks straight so it was an easy choice.

-what about Anxiety tremors, how was it created and how would you decribe it?

We wanted to shoot for a more old school, punk influenced grind sound. Not so worried about how technical it was but more about how pissed off and primitive it could be.

-in Sacridose the guitar sound is more "normal" than it was in Cellgraft, did you wanted to try a new sound?

Mostly focused on hatred of civilization, science fact, and the flaws of the human psyche. Also death.

-do you already have new songs?

Enough to do a split or something. Trying not to rush writing just to put out more records.

Life. And a good way to crush ignorant losers with blast beats.

-which new grind (or not grind) recent bands would you recommend?

-what's going on in the Tampa scene?

a lot of hipster kids discovering the smiths for the first time, some sweet death metal bands popping up, a lot of hardcore straight edge kids buying HM-2 pedals and not a whole lot of grindcore.

-what is planned for Sacridose in the coming months?

Hitting the road for our Midwest/east coast tour in November. After that, 305 Fest and more writing.

-something to add?
Listen to Slayer.