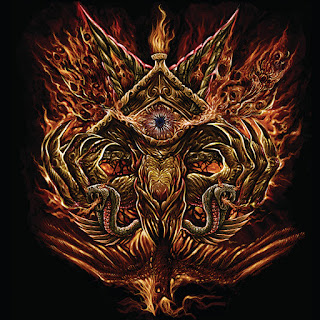 Deiphago, the filipino trio, one of the best brutal, raw and chaotic black / death metal band are back with their fourth album called Into the eye of Satan (released by Hell's headbangers). Deiphago's music is raw and chaotic in nature but it's never an excuse for poor production and approximative musicianship, quite the contrary. Colin Marston did an excellent job on production duty (the bass is MASSIVE, everything sounds powerfull and clearly distinguishable), and the musicianship is high class. The drumming is manic and relentless but also full of versatility and never messy. The bass, with it's huge sound and the power trio format, is able to bring something more interesting than just adding some bass frequencies to the music and is a full component in the songs and in the atmosphere of the album. But the most impressive is the lead guitar parts with some otherwordly weird soloing. It's really surprising to find, in such a brutal metal album, solos that are fast, dissonant and crazy but often sounds more like jazz than metal, they are excellent and really catch you off-guard, and are surprisingly fitting well the chaotic atmosphere of the album.If you are looking for radical and extreme metal, with a unique personnality, look no further, Into the eye of Satan is the real deal. One of the best and most interesting extreme metal album of the year.