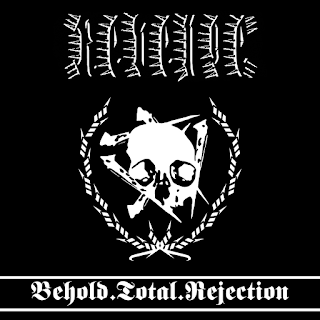 Revenge is back with their fifth full lenght album called Behold.Total.Rejection. The canadian extremists led by James Read are once again delivering their raw and brutal black / war metal. The album start furioulsy with an old school grind assault at the beginning of the first song. This grind element, in the drumming, the vocals and the simplicity of the riffing is a distinctive element of the Revenge sound in the black metal scene. Revenge often sound like a grind / punk band covering the most straight forward Marduk songs. The drumming forward in the mix stress this grind feel as well as the loose and wild playing. But the hatefull and bestial vocals makes sure you're listening to some black metal. also the songs have a normal length, and there's some lead guitar solos and a few slower paced parts. But unlike most black metal bands Revenge seems not really concerned about creating a cold / or epic or mystical atmosphere, they are all about full on aggression and sonic savagery. But the result sure does sound "evil" in a very direct and unsubtle way. With this new album they manage once again to create a level of barbaric intensity rarely matched. Powerfull stuff!