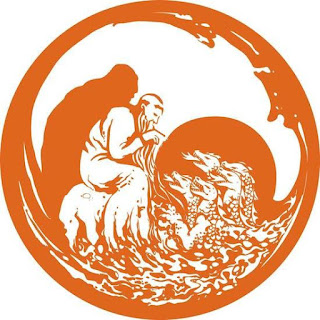 Stara Rzeka is a solo project of Kuba Ziołek of the polish collective Milieu L'Acéphale. Zamknęły się oczy ziemi is the second album and is intended to be the last one (which is a pity but I'm sure Kuba Ziołek will continue to bring us good music in other contexts). The album was done with the help of musicians from the Innercity ensemble (also part of Milieu L'Acéphale). Some songs were written before the first album but this one does not just sound like the other half of the first, for exemple there's not metal vocals anymore. But the basis stays the same :  folk, drones, noise and krautrock played by accoustic and electric guitars, synth, electronic noises and beats, a bit of drumming, and only clean vocals this time. Albert Ayler, Pharoah Sanders and Moondog are cited as influences. The result is fascinating and moving music, mostly quiet and trippy but with also some moments fitting the usual song structure (riffs, singing, etc.). This is a great album, with a unique atmosphere, and I'm impatient to lsiten to  Kuba Ziołek next project (solo or with a band).