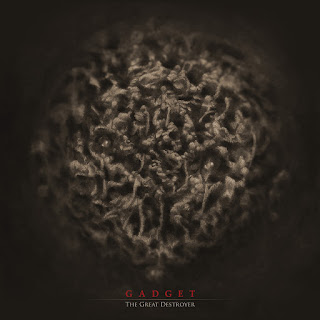 The Great Destroyer is Gadget third album and their first album in ten years (latest release was a spit with Phobia six years ago). From the intensely explosive Remote to the more subtle new school hardcore like melodies in The funeral march Gadget was a grind band that brought their own way of playing grind, taking their own part in the Nasum / Relapse led wave of breathing new life and modernity in grind at the turn of the new century. With their new album (also with Relapse records) we can still relate them to that movement but this time they're not really bringing something new. In fact The Great Destroyer is maybe their more straightforward album. One one hand it is disappointing. On the other hand, as a back to the basics of old school grind (but with a powerfull modern production) album, it is a damn good one, displaying the excellency Gadget always had when it comes to grinding.  This sure is as fast, relentless and intense as grind should be and The Great Destroyer will probably stay as one of the best and more enjoyable grind album for 2016. I also have to mention that Gadget kept their few slow paced moments (it's trendy nowadays but that was already a part of the Gadget mix fifteen years ago or more). apart from that this is just pure unadultered grind. those slower paced parts are not my favourite, but well...  maybe they're needed on the album to let the listener breath a bit sometimes!