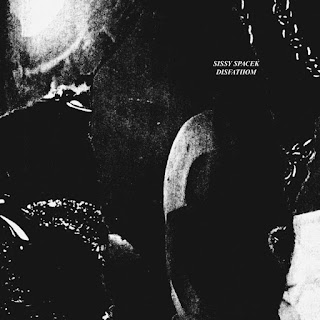 This new Sissy Spacek release, called Disfathom, can be seen as the following to their "Lead their exit" one two years ago (In the meantime they released two other albums, one more free jazz / noisecore as an ensemble of six musicians, and a more noise / power electronics one. good stuff as well, also extreme in a different way). This time Sara Taylor (Youth Code singer) is not holding the mic anymore and they plays as a duo, John Wiese drumming and Charlie Mumma playing bass, I don't know who's doing the vocals. It sounds more death-metal and less grind / hc than Sara Taylor I'd say but it aslo fits the music which is relentless noisegrind, eighteen songs in something like ten minutes. never slowing down. never. very fast and dense stuff. If you're not already convinced that most hardcore bands pretending they play very agressive music are just posers... And Disfathom is nearly "easy listening" compared to their two previous releases. If you liked Lead their exit you'll find Disfathom a really worthy successor. And if you don't kown already Sissy Spacek don't miss the occasion (you can also read the interview I did in 2014 with John Wiese). Their music is as extreme as it can be whitout following the traditionnal patterns of extreme metal (nor any other pattern exept their own).