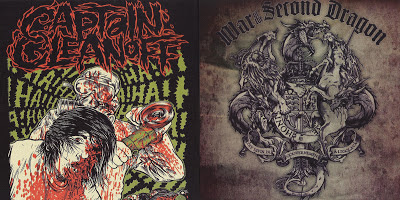 the 3 songs by Captain Cleanoff from Australia are old school classic grind of the finest quality, and if you like early grind these songs sure will please you. one song is a Righteous pig cover (I told you it's good old school grind!).

the 3 other songs are by War of the second dragon, a new band formed around Shane Embury with other guys from Birmingham (England), including Fukpig's screamer. Shane is there from the beginning but the grindcore of his band sounds clearly the more modern of the split! but it's not so surpising since we know that he never lost touch with the evolutions of extreme music.
I think this split is the first release of the band and it's a great introduction. it's very intense, very fast, heavy, merciless and pissed off, with also some epic grooves.

in conclusion it's a highly recommended split, I played it many times and I'm waiting for the next releases of these two bands.

you can get it HERE.