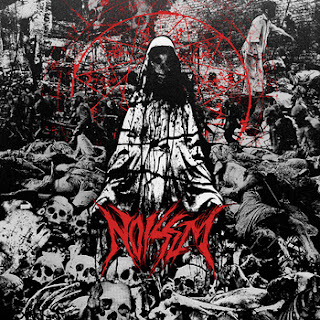 Noisem is a new band from Baltimore, and they released a really good first record, Agony Defined, through A389. But wait, it's not another hardcore metal album. It's cooler and more exiting than that (I suppose the fact that A389 is also based in Baltimore explains the association. Plus it looks like people in A389 recognize quality even when it's not hardcore!). What Noisem plays is all-out metal, old school tHrash metal. It sounds like Slayer mixed with the rawer German tHrash sound (early Kreator, Sodom). And they do that with all the frenetic energy needed plus a modern production. Nothing really new but really pleasing music, and quality thrash metal gets rarer nowadays so it's good to see a new band doing that and doing it the way it should.

Enjoy it on BC


The guys answered to my questions by mail, so thanks to them you can read below what they have to say about Noisem and Agony defined :

-can you present Noisem, how did the band formed and what was the project at the start?

SP- Noisem is the result of 5 years of lineup and name changes. Over those years we also honed our songwriting craft to what you hear on Agony Defined. It's basically been a slow but steady process of finding what we want to do and what works best for us.

SP- Iv'e been playing music and performing for almost as long as iv'e been a live. We all have side projects and other musical endeavors we poke at once in a while but for me Noisem is my main focus.

-what about your first album, how did you wrote and recorded it?

SP- It was written between winter 2011 and summer 2012. We recorded demo after demo and played shows. When it came time to finally record it professionally with Kevin Bernsten we had been playing these songs for a while. We tracked everything in 2 and a half days at Developing Nations.


HP- The recording process was really smooth. Kevin knows exactly what he's doing and is such an easy guy to work with.

-how did you get signed on A389? I supposed that the fact that hey are based in Baltimore like you made it quite a "logical" thing?

SP- Dom had contacted with interest of hearing our stuff, but we didn't have anything, He eventually invited us to play the A389 9th anniversary bash and almost immediately we began our incredible working relationship and friendship.

-did the "thrash metal revival" of the last years played a part in the obvious thrash metal influences in your music or were you from the start directly into old thrash bands?

SP- Of course we listened to tons of the newer bands coming out a few years ago but for the most part we mainly took influence from the older bands.

HP- I'd say that some of the newer bands in a way, pushed us to start actually doing things with this band. But when it comes to our song craft, most of the influence came from the original wave of thrash.

-i'd say Slayer and German bands like Kreator or Sodom are maybe the closer to the kind of thrash you craft, do you think so? Are there other thrash bands that were influential for your music?

SP- Definitely. Exodus was also another band that led to us wanting to play faster, heavier, crazier stuff. Bands like Dark Angel, Evil Dead and Demolition Hammer are also pretty big influences on us.

-I guess old school death metal is an influence as well? Which bands do you like, Cannibal corpse, obituary?

SP- For the most part its early Cannibal Corpse, Morbid Angel, Pestilence, Terrorizer and Repulsion.

-which is your favourite song in Agony Defined, and why?

SP- Probably Severed. Its just one of those songs that always gets the adrenaline flowing a little harder than the rest of the songs.

HP- I'd have to agree. Severed has been my favorite since it was written last year.

-have you started writing new songs, how will be the next record?

SP- We have been writing and next week we will be entering Developing Nations to record with Kevin again for a few releases for next year.

-which bands from your area (or from anywhere else) would you recommend?

SP- Full of Hell, Dead Gods, Barbelith. Always the coolest guys and a pleasure to play with.

HP- It's always fun to play with Universal Remonster, Budd Dwyer and Ilsa.

HP- I would just like to see the great bands from around here keep doing it and hopefully all the work they put into it pays off.

-you're currently on tour, is it your first one, how is it?

SP- We actually just got back at the time of us writing this. This was our second tour and it was great. We got to hang out with Full of Hell and travel to places we've never been.

HP- It was a great tour and the bands that played each night killed it.

-what is planned for Noisem in the coming months?

HP- And hopefully some more releases

HP- Thanks for your concern.