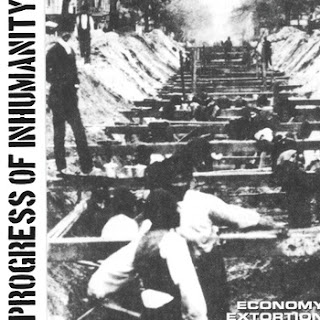 I discovered this greek grindpunk band thanks to the new volume of the Monomaniac series (by Blastbeat Mailmurder production,see two post below). and I'm really glad I did because Progress of inhumanity is a band that carries everything I like in this kind of music. the relentless balstbeating agression, the punk rythms as well, the angry vocals really fitting the music and good songwriting putting aside everything that would be useless in the songs, so all the energy is concentrated and goes straight to the point. the perfect combination of speed and groove that put a smile on my face and makes me "air drum" every time I listen to it. what they do is not really special in that they're bringing something new, it's just that it's especially well done, which is more than enough! Economy extortion is their second release, their first one, Escalating decay being already excellent as well.
one of my favourite grind and hardcore release for this year.

and read the interview we did by mail :

-can you go back to the origin of the band and tell us how it happened? what was he project at the start and how have you evolved since the beginning of the band?
The band started as a three piece in 2006 , consisting of Nick on drums , Kostas on guitars and Patroklos on vocals ,with the purpose of playing fast /ugly stuff .There was no bassist at the time but we kept going , rehearsing , making songs, playing gigs etc. After we did the “escalating decay” cd in 2010 , Kostas Alatas came in and filled in the bass player position. This lineup is up to present day . Now with the bass involved , there is a different perspective in sound. more raw = more intense…


-do you play or have played in other bands?
Nick used to play drums in Vulnus (brutal death metal). Nowadays is doing Cut Off (fastcore/powerviolence) as well. Kostas (bass) is playing in Mencea (technical death metal) and Ravencult (black metal)

-the band is called Progress of inhumanity, I suppose we can take it as an observation concerning the state of the world. how in your opinion inhumanity is progressing, and do you think we can stop this progression and how?
Every day we see the decadence of human society especially the self-centered society we live in, so inhumanity comes in many forms. Suppression and exploitation is everywhere : in schools , in the army(army is obligatory in Greece), in the system , human relations , your everyday job , unemployment , the streets , through hunger , police brutality. Fascism and celebration of greed are the current issues we have to face, now more than ever…

-what do you want to express through your lyrics?
Nothing more than a personal opinion on shit we face every day.

-how does the situation in Greece affects your music and your relation to it?
Every day we feel more and more caged up , so we try to let all the anger in the music. It surely affects us in any way, that’s the reason we play fast and raging stuff. Greece is a trainwreck nowadays and we see no positive future ahead. you can feel that in our lyrics.

-what about Economy extortion? In your opinion how is it different from Escalating decay
We think that it’s a more spontaneous and raw recording, since the whole thing was recorded live in one day and we added the vocals next. There is a small change in the music concerning the fact that we have a new instrument in the mix(bass). I guess it sounds a bit more punkish and crude.

-do you think grindcore (or grind related hardcore music) can be undestood as a reaction against the recuperation and commodification of punk?
Yes, but not easily, because most people think that this is crappy noise. As long as they don’t like the music , they wouldn’t be in the position of even opening the record sheet , finding out what the hell is all about…

-do you think that the DIY way of action could be a global alternative or do you see it more as a practical way of growing for an underground band?
We believe that the DIY action IS global alternative itself. Bands making their own records, their own recordings ,doing gigs and working with friends … it’s a growing network of independent thinkers. We prefer this way because we can really build bridges between people rather than having vacant personal relationships. “Doing it yourself” is very healthy for us.
-which bands were more influential for you, either for the music or for other things?
Old Napalm Death for sure, S.O.D. , Suicidal Tendencies, Regurgitate, Disrupt, Brutal Truth, Japanese grindcore, some American hardcore, etc. We all listen to tons of bands, and our tastes vary from Brutal Death Metal to Crossover, Thrash and sludgy stuff and we try to mix it up in a personal perspective.

-which bands from your area would you recommend?
Delete The Mass, Slavebreed, Inveracity, Ravencult, Dead Congregation, Sarabante, Head Cleaner, Wreckage, Cut Off, Gutter, Raw Noise Apes, there are some great bands lurking in the greek underground.

-what about your part in the new Monomaniac compilation?
Panos Agoros is a long time friend and we liked the first compilation when it popped, so he offered as a spot for the next monomaniac, the answer was an immediate yes. We like this compilation coz it’s like tasting different shots rapidly in a bar! We like the fact there are so different artists in it.

-what is planned for Progress of inhumanity in the coming months?
Some gigs here and there to play live our new release and have fun, more rehearsals for new material, and we’ll try to play abroad some time. Anyone interested in some furious grindcore can get in touch here:
progressofinhumanity@gmail.com
www.facebook.com/progressofinhumanity
www.progressofinhumanity.bandcamp.com