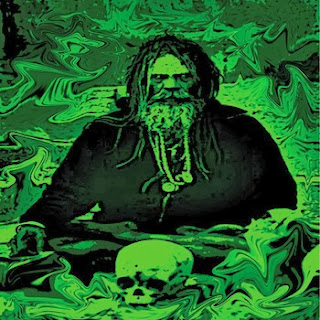 This time the nightmarish sludge heaviness comes from Italy. they are called Nibiru and their stuff is like a different kind of drug, a different formula in downward slow heaviness. Caosgon released in the beginning of this year is their fisrt album and it's excellent. I said sludge but it's because of the dirty noisy guitar tone and the raw vocals, there's no punk element or uptempo, it's mid tempo or for the most part slow. what's the most striking is the ritualistic vibe of their music, with a somewhat "tribal" touch provided by some excellent and original drumming. it evokes some primitive lysergik  induced collective hallucinated gatherings. the effects and the vocals and the guitars helping to build these ominous and eerie trippy atmospheres. dark psychedelia in its most powerful musical powers.


the guys answered to my questions by mail, read the interview below! :

-to start with, can you tell us how Nibiru was formed and evolved up to now?

Ardath: The project NIBIRU started at the end of summer 2012, a storm that cleanses the conscience from too many constraints, too many static reality without concrete follow.
I,  RI and SiatriS after the experience in Tronus abyss, safe educational experience for better or for worse, we felt a strong need to free ourselves from to many constraints and fetishes elevated as inconclusive bogus gurus, to leave our creativity flow without chains.
Since everything is born 'CAOSGON "after a few months, recorded live at AADYA TEMPLE, pure, clean, embarrassing, angry improvisation. Listen to "CAOSGON" with the realization that nothing is programmed, pure moment.

-in your interview with The sludgelord you explained the reasons behind the choice of the cover art picture for Caosgon and I thought it was really interesting and revealing about NIbiru, can you explain it also for the Blasting days readers?

Ardath: Watch the video SMASHANAM on you tube, watching those images do not need words to understand how the Aghoris coherently represent the tribal and instinctual universe, that Nibiru wants to bring with the music

Siatris: on the cover of CAOSGON you can see a man, or rather the vestiges of a man, who lives beyond good and evil, he lives for the moment, is pure instinct, pissing inside a skull used as a bowl for the alms, eating junk and cadavers... meditates for hours on the crematorium ground .. maybe he's crazy maybe he's realized, ​​in his mind everything is perfect, the design created by Shiva takes its course, then everything is ok.. perhaps too hard for us to understand…but I find him so fuckin' alive, he can kill with is eyes, the Aghori is the cancellation of the planned consciousness...

-looks like many bands with a very improvisationnal / live approach to their music have a kind of spiritual relation to their music, is it also your feeling?
Ardath: Undoubtedly the live improvisation requires a journey without a destination in the deep inner self, to be overwhelmed by the desperate cry of a man condemned to death, now dissociated from the world, he starts up the scaffold.
A journey into the dark regions of the unconscious ..... Spiritual? It may be, for me it's a never-ending sexual magic .....

Siatris: create an improvised track is like a ritual, you can immediately feel the vibrations if something positive is coming, personally I try to empty my mind, I do not think anything, I let the music flow because if I let my mind interfere, I do a mistake.

-what about Caosgon and the way your wrote / improvised the songs, recorded and produced it?

Ardath: there is a marked road and no indication in the moment, moment in which we have our instruments, each of us develops and shamelessly spews his anger, his love and hate,to exorcise the whole, true animal instinct without foolish and trivial calculation and without any desire for pleasure or meet someone. We exist, only us, it is essential the deep union that creates a single indissoluble bond .... Moreover there is not give a fuck. But if your approach to NIBIRU is this, you cannot go unscathed from listening to these sick notes.

Siatris: we get into our rehearsal room, turn on the instrument, play and record everything live, we understand immediately if a piece suit us or not ... at first listen we imagine immediately what to add in post-production: Virus, Moog, tibetan bell…. I made a premix of the tracks and then we rely on a professional studio to complete the work.

RI: it is much simpler than you might think ... we enter in AADYA TEMPLE without anything fixed, without purpose. Warm up the amps,few cigarettes, beer, wine, and then we start playing live recording. At the end of the evening we hear again if the session has "played" well then Siatris brings home recordings and works on premix. After a certain number of evenings we go into the studio to mix and master the product. And the disc is ready ...

-Caosgon is on my list of favourite heavy records of 2013, and I saw it's also in other similar lists, did you expect the attention you get in the underground circles?

Ardath: yes,I expected it, CAOSGON is outside the box, now the audience listens mostly banality or projects extremely rhetorical, always the same,but this does not mean that those who like a certain genre of music does not notice and feel the wave and the uncontrolled energy of a musical approach disturbing but at the same time hypnotic that makes the world around superfluous.

Siatris: not really ... the problem is that nowadays comes out so much material that it becomes difficult to find something that will really amaze you, and this happens in all genres of music. I felt we did something special, and I was satisfied, but read so many positive reviews made ​​me realize that we have gone a step further..

RI: If you produce a disc even if it is not recorded very well to those who must arrive, arrives... I enjoy it…. satisfies my Ego and gives me reason that Caosgon is "arrived" ..

-you already posted on your bandcamp a songs that would be on your next album, are some other new songs already written? what can you already say about Netrayoni?

Ardath: "NETRAYONI" is ready, it will be a double CD available from the middle of January 2014, nothing has changed with regard to the mode of composition and recording, so much alcohol, a lot of smoke, a lot of anger and a lot of psychedelia.
it was a memorable trip for us, we trust that the listener can grasp the revelation breathing sweat and blood with satisfaction.

Siatris: I am very excited for Netrayoni, unfortunately I have vague memories of evenings spent record the songs, I remember Ardath,totally drunk that falls and breaks through the table of the mixer, I remember that I've played drums naked with a cowboy hat,  and RI, which is "possessed" by the spirit of a famous deceased italian actor , Vittorio Gassman and recites a monologue about life pulling punches against the amplifiers and the walls ... evenings were crazy, came out a lot of great materials and we could not discard it , so we choose for a double cd...there is a raw but powerful sound, better than caosgon, the songs are very dynamic, forget the verse-chorus structure, each song is a cosmic journey.

-what are you listening to at the moment? and which italian bands would you recommend?

Ardath: At this time the projects that have impressed me most are Altar of Plagues, CELESTE, BLACK PYRAMID, very interesting VISTA CHINO and ARCTIC MONKEYS, always present in my listening ROZZ WILLIAMS, NICK CAVE, Fields of the Nephilim.
I do not particularly like the Italian music scene as I don't love the country where I live, in any case, there are some interesting reality, shame that our musical context prefers the banality and commercial ..... Well shit.
The first MARLENE KUNTZ…. I always listen to them with pleasure.

Siatris:Now I listen black metal bands like Tenebre in perpetuum, Fenria, Black blood and sometimes electronic or dark ambient music like the last work of Juno reactor or Troum and Jen Pox... a very interesting italian band for the doom scene is Malasangre,another great italian band is Stoner Kebab and there's also a sludge band from Switzerland called Intercostal, they are fuckin' awesome..

RI: I'm monotonous but I still listen to Black Sabbath, as 30 years ago. Then go back to listening to today SLEEP, YOB, SUNN O))), EARTH, NADJA, DARK BUDDHA RISING, NEUROSIS, ISIS and everything a Post Sludge in its various forms. Currently in Italian I recommend GOBLIN in the 1975's formation.

Ardath: The mass who listens mostly banality without depth,should suddenly light up and approach those who make music with heart and soul with the desire to release the energy of which we are made without calculation and preconceptions. Pure utopia, now it's all a sad, sad calculation

Siatris: It's a very hard question…I'd love to see a massive return of physical media such as CDs and vinyl, I'm not a lover of the download, I do not like things that can not be touched ... starting from the women! but I imagine that the situation will evolve exactly the opposite ... I'd like to see the collapse of  the multinationals of fake music and watch the small independent labels, those who work with passion, have the deserved success

RI: I honestly cares little, I just know that Nibiru will pull right for his road, for the rest ...

Ardath: The new CD will open the year, we would like to introduce ourselves as soon as possible in front of an audience, I am sure that it will be truly perceived the primal force of NIBIRU

-some final words to close the interview?

Ardath: cleared the temple if you will not be affected, unless you want to throw up in pain, is not at all permissible to approach this dwelling.
A few days, and NETRAYONI will exorcises your limits.

Siatris: Many thanks to all the people who, with infinite patience lead with passion blogs and create what is the true underground music scene, Kaly is on your side.