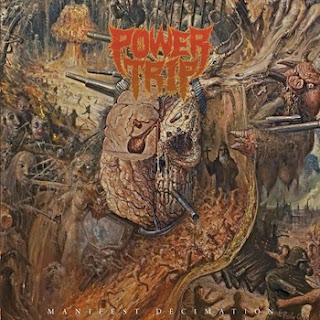 I suspect the guys at Southern lord records to know a few things about metal. Anyway they did a really good job in releasing this Manifest Decimation, the first full length of Texas' Power Trip. I'd say it's easily one of the best recent records in the good ol' badass 80' metal style. Even if the guys in the band were not even born at that time, when listening to it, you have a taste of the urgency, the attitude and the genuine spontaneity of the good metal of these days. It's mostly thrash metal (think Slayer circa Hell Awaits and Reign in Blood. The riffs, the sound, and the drummer paying some cool tributes to Dave Lombardo)  but also death metal (think Bolt Thrower) and a touch of crossover hardcore (think Cro-Mags).  a really awesome and flawless record (flawless if you don't absolutely needs something really original). Just push play and soon it will grab you and make you headbang and air drum in your living room... You've been warned…

Power Trip on BC