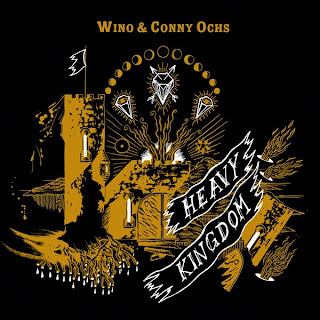 I'm a bit late with this one (it's been released in 2012) but it's so good and I still listen to it on a very regular basis so I had to post about it.. Heavy kingdom is a collaboraiton between Wino (yes this Wino, the one of St Vitus) and a young german folk singer songwriter called Conny Ochs. except for some guitar solo it's entirely accoustic. but they prove that songs don't have to be amplified to sound heavy or have a doom vibe! even if it's more about the melodies than heaviness it still sound heavy and very..Wino. because of Wino's great vocals and because of the riffs that are powerfull enough to sound great without needing any amplification. I said it sounds very Wino but that doesn't means that Conny Ochs is a dead weight for this album, far from that, I don't know exactly which part he played in the songwriting but what is sure is that he's a great singer and his vocals are a great complement to those of Wino, bringing an extra dimension to the songs. I'm sure this album will stand the test of time and I would be really pleased if they do another one together.