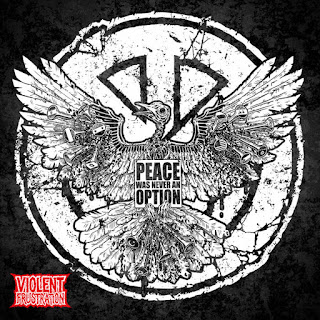 Violent Frustration is a recent german death/grind band and they released at the start of the year a really good album called Peace was Never an Option (after two other releases in 2013 both also really good). Their logo is obviously an homage to Insect Warfare but don't think they're trying to be clones. Insect Warfare could be one of their influences, but their music also evokes Nasum or Napalm Death (elements of old school and modern grind, with a powerfull production and relentless intensity) but I'd say what makes them different is the old school death metal elements, reminding sometimes Bolt Thrower. Grind indeed but with added death metal heaviness, brutality and groove. This is an excellent album and it will find its place in my coming best grind of 2016 list.