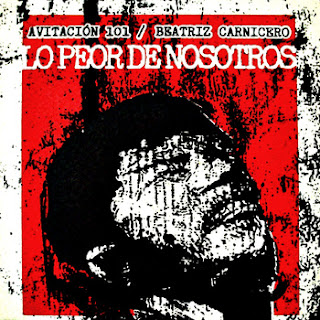 Lo peor de nosotros is a split with two bands from Uruguay, Avitacion 101 and Beatriz Carnicero.

Avitacion 101 plays crust with some very good female singing / screaming that sounds very heartfelt and springs life into their four songs on this split, and since the songwriting and playing are also very well crafted i'd say all crust / HC punk lovers should give it a try.

Beatriz Carnicero first record called No reces released last year made an excellent impression on me, so maybe that's why at first I was a bit disapointed with their tracks on this split. I'd say No reces sounds sharper and tighter. but don't worry, their eight grinding hardcore (or powerviolence / fastcore) songs are good anyway. but I'm waiting for another record of the caliber of No reces. If it's not already done yet I really recommend you listen to it (and read my review, with an interview of the band HERE).

and listen to the split on BC.