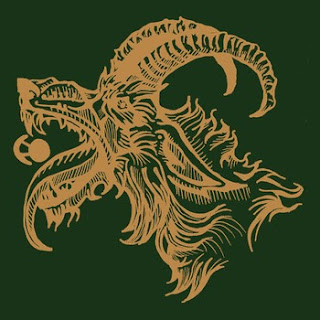 Black soil by Finland's Horse latitudes is one of the best doom records of the time, by a band that get noticed for its original approach to the style. in their third album they dig once again their brand of heavy, slow, primitive and ritualistic doom. after a droning intro the title track starts  very strongly with some huge double bass drums and and then bass guitars, with a lot of power and wild groove. the result is truly amazing and its easily one of my favourite songs of the moment. the excellent drumming, simple but powerfull and the bass put forward in the mix stays a specificity of their sound and adds a lot to the ritualistic vibe of their music (the only guitar parts are bass guitar). the vocals sometimes growled, sometimes melodic in a typical old school doom fashion are really good. some few and discreet keys parts and effects adds to the magic of the atmosphere they devellops. the three long songs on the album are each one excellent and it sure will stay as one of my favourite doom records of 2013.

Vellu, one of the bassist in HL answered to the questions I sent him.
Read it below :

-to start with can you tell us how Horse latitudes was formed and evolved up to now?

Horse Latitudes was formed in 2009. I wanted to play heavy, droning music in the vein of slowed-down Hellhammer and joined forces with fellow bassist and friend Heidi who immediately liked the concept. Soon after Harri came into the fold, in the beginning solely as a drummer, but after a while as our vocalist also. The core concept has remained the same from the start, but there has of course been natural evolution and refining of our sound over time. The latest addition is an analog bass synthesizer, which you can hear on the new album. I handled the synth parts during our recordings, but we have a fourth member who plays the synth parts live, adding some more texture also to the older songs. You could say that nowadays we have three bass instruments in the band, heh.

-was playing with just bass guitars and drums a way to get a more warm, organic sound, to focus on the "physical" side of music, on its pure vibrations?
You hit the nail on the head there. There’s just something very primal about loud bass guitars; you can feel the music as much as hear it. This is all the more evident when playing live! There’s also no room or need for fancy solos or shredding, we only work with the very core of the riff. That’s not to say we don’t like to use modulation or delay effects and such when the song calls from them, but they’re always subservient to the riff and not the other way around. I think the sound of two distorted bass guitars is one of the most pleasing sounds there is. There’s nothing wrong with guitars per se, but I abhor the modern tinny and lifeless “metal” sound so often heard today. It’s the same with drums: Harri always goes for the most barbarian and cavernous sounding drum sounds possible, while at the other end there lies the trigger hell.


-I really like the primitive, doomy element of your music but I also like how you manage for exemple on the amazing title track "black soil" to be really evocative and even epic, even without a lead guitar. what about the writing of this song?

‘Black Soil’ was originally supposed to be an instrumental interlude on our previous album, ‘Awakening’, but at the time we felt that it didn’t fit on the album. The song went through several phases until the whole band was satisfied with it. In fact not a single note of the original composition is left in the finished song. Arrangement-wise we have learned how to better create dynamics with our instrumentation and I think you can hear the results on ‘Black Soil’. I also play some primitive leads when the song calls for it, though I did a little of that on ‘Awakening’ already.

-what about the whole new album?

When we started working on the new album, we agreed early on to include only three songs in order to make it a seamless whole. Compared to our earlier recordings, we took a little bit more time to polish the songs this time and I think it paid off. That’s not to say that ‘Gathering’ or ‘Awakening’ are rushed, but I feel it’s better to work at a slower, more relaxed pace. Regardless, we’re a fairly prolific band, so in the end it took perhaps six months to give the songs their final form.

-what about the lyrics, I read that it's about how human beings are related to nature, can you tell us more?

All the songs on ‘Black Soil’ deal with the same themes from different angles: “Three songs of ends and beginnings”. They’re represented through analogies between physical and spiritual worlds, inner and outer reality, between micro cosmos and macro cosmos. The lyrics of ‘Black Soil’ are meant to dissolve the differences between the physical and spiritual, natural and human reality. The only way for setting oneself free from the restricted view and experience goes through the process getting rid of the denial and escape of the end, as only through acceptance of the ultimate end the essence of life as the infinity of possibilities can be realised.

-have you started to write new songs, have any idea about how the next record gonna be?

We haven’t started working on new material yet, but we did record a few songs in the same session that are not on the new album. One will appear on a yet-unannounced split release, but that’s all we can say for now.


-what is planned for Horse latitudes in the coming month?

In short, nothing. Heh. We’re taking time off as Harri is busy touring Europe with his hardcore punk band Perikato together with Death Toll 80k. They’re very angry and chaotic sounding in the vein of Finnish classics like Kaaos and Kirous. They’ve got a few 7” releases under their belt. You should check them out.

-I have the impression to discover a new good finnish band nearly everyday, is playing music so widespread in Finland? how do you explain the fact that there's so many good band in your country?

I think this phenomenon exists most vividly in small cities in the countryside. There’s very little to do, so you either end up pimping cars or start a band. Harri is from a tiny city near the Russian border, heh. One thing is that the scenes in Finland are very small, everyone knows each other. That can be a good thing, but there’s also a certain herd mentality where suddenly one sub-genre becomes very popular and the scene gets quickly saturated with clones. The current trend has been noise rock, previously it was middle-of-the-road sludge. Who knows what’s next? It used to be a lot more isolated, which explains how bands like Unholy and Thergothon came to be. The good thing about the popularity of down-tuned music in general is that we have had more good bands touring Finland during the last five years or so than ever before.

-what are you listening to at the moment? and which not really well known band would you recommend?

For me it’s been mainly Bong lately. During our UK tour we had the pleasure of staying at the house of Bong’s bass player and we also managed to catch them live in London before we left for Finland. They’re starting to be fairly well known and justly so. As for the recommendation, we played with a band called ‘Of Spire and Throne’ in Edinburgh and they blew me away! I believe they’re normally a four-piece, but they were just three members live. Not that they needed the second guitarist, the sound was immensely massive. They play really barbaric and oppressive sounding doom metal that reminds me of both Corrupted and Winter. How’s that for a refence, eh?

I’d like to see bands trying to find their own path and not just pay tribute to the classics. You don’t have to reinvent the wheel or go for a gimmick, but just following the latest trend is disappointing. Retro-sounding bands are most often boring, if you’ve heard the bands they’re aping that is.

-some final words to close the interview?

Thank you for the interview.