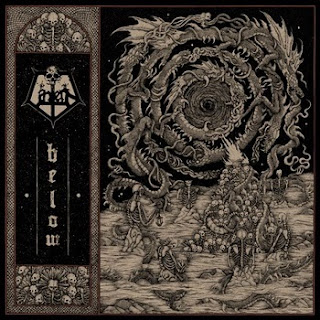 With their first album called Below, released by the truly excellent Dark descent records, Lantern (a two man band from Filand) entered the death metal scene in the best way possible (not exactly their first step, they released before a good EP). the album has a big personnality while being firmly grounded in death metal tradition (they prove with style that you can do death metal the old school way without sounding like countless other bands).The vocals are powerfull and with an unusual, very rythmic, flow (reminds a bit Vader vocalist). the drummer keep it simple (often close to D-beat) but is doing just what is fitting the best for the dynamic of the song. the guitar work, often melodic and with many leads, is building strong and dark atmospheres. both morbid and catchy as only death metal can be, this one is going to be one of my favourite of the year in that style.

do yourself a favor and stream it on bandcamp.


Cruciatus, who handle all instruments in Lantern kindly answered to my questions. read it below :


-tell us about the project you had when forming Lantern, was being a band grounded into death metal tradition but doing it a different way a decision you made at the start?


Lantern was formed by me and vocalist Necrophilos in 2007, not too long after my old band Cacodaemon had ceased to exist. The primary agenda was to allow me to continue executing my musical perversions, and to be honest, we weren’t quite sure what would come out of the brew as we began to stir it. The first demo was even somewhat improvised (a method we still apply to our works to some extent), and our sound began to take form - slow but steady. Therefore, our sound was not pre-meditated, not at all. The pieces just fell into place, as we started putting this aural offal together… with as few restrictions as possible.

Cacodaemon was my main band prior to forming Lantern, which is currently the only band I’m actively playing in. We played simple, straightforward, albeit pretty chaotic old-school death metal… more uncontrolled, one could say. Even though I nowadays think of the past band as a musical apprenticeship preparing me for Lantern, we still had some very good times and, not to forget, good material.

I’ve also spent, what, over 10 years with DTK (Death Thrashers Kuopio), truly a one-of-a-kind thrash metal output, wherein I play the drums. We haven’t been too active lately, although returning to the rehearsal room has been constantly discussed. Other than those two acts, I have been assisting a few mates’ bands on the drum department every now and then… Inhumane Deathcult, Hellboozer Union and Impervious to drop a few names.

-I read that your guitar melodies were influenced by progressive rock. but I think these melodic parts (by death metal standards I mean) don't really mellow your sound but on the contrary stress its raw, grotesque, side. was this blending of melody and rawness something you want to focus on when writing the song.


I would not say the guitar melodies per se are influenced by progressive rock tunes. The particular genre - as well as all quality music that has changed my aspects musically - has moreover shown me how to do things differently, how to try to break boundaries. I could say progressive rock and the likes have taught me stubbornness, an feat essential to my style of playing and composing, and also essential to every attempt of creating something new / making progress anyway.

I think that the border between melodicism and raw power is very thin in Lantern’s music. A little differently made, this could be very wimpy sounding music, hahah. But something in me keeps this material winding on the raging side, luckily, as death / black metal should never be too subtle. It needs to be comfortably linear and boneheaded. But you know: sheer linear power would not have the same power as the one combined with a bit of thought. You know, the calm only emphasizes the following storm… Fortunately juggling with these particular balance issues is not something I’d need to focus on when writing; it’s quite integral to my way of working nowadays, something music demands to become good, if I were asked.

-these unusual melodies and the "metaphysical" atmospheres in Lantern reminds me a bit of Morbid angel, is it an influence for you or does it just happens that the two bands shares some similarities?

Altars of Madness was among the first vinyl records I have ever bought, so this connection might be deep-rooted in my brain somehow, although Morbid Angel is not among the top influences for Lantern. Perhaps both us and MA are just primarily inspired by similar things?

-I like how Below is produced in a way allowing to hear clearly all instruments, including the bass. seems to me that the bass is really an element that was really present in the sound of death metal (Cannibal corpse's The bleeding comes to my mind for example) but get often lost in more modern death metal. a comment about it?

Basically, our goal was to cram as much atmosphere into the soundscape as possible, while trying to keep the separate instruments / elements as audible as possible. For you know, the audio engineering duties were handled by the band, except for mastering, which was brilliantly executed by Dan at Resonance Sound – hail!

For some reason, bass has always been one of the most challenging instruments for me to mix. Yet maybe for that reason I have paid extra attention to that department, having the bass become somewhat audible as well. I dislike the idea of having bass as an instrument whose presence can only be acknowledged by muting it out from the mix. I don’t see it that way. I grew up listening to metal where bass had some characteristics, like older Autopsy and Death records.

-I also like how the drumming is simple (at least by death metal standards), but a bit different to the usual death metal drumming parts and really working as something adding some dynamic to the songs. how would you describe your approach to drumming in Lantern?

I most definitely am not a metal drummer in particular. As described by many, I have a very loose touch for drumming; I tend to jam out and let go of rules and regulations. I guess that’s what happens when you let a natural born lead guitarist hassle in the rhythm department of a band, hahaha. Also, I’m very lucky to have such a great live drummer as J. Poussu, as he plays from a similar basis as I do… only better.

-a few words about the lyrics?


Well, their content varies wildly. Some of the lyrics deal with horror-like fiction (sometimes even faction), while some are written to manifest my unexplainable inner surges / visions / experiences. And it’s all tailored with the riffs for everything to go hand-in-hand and appear as uniform as possible. The lyrical efforts are something I’m very pleased with, so again: I’d endorse people to get to know their content themselves. I don’t want to spoil the texts for anyone by over-explaining them.

-which song on Below is your favourite and why?

If I had to pick one favorite from this album that works best as an entity, I’d say Entrenching Presences, simply because it has some nifty riffage I’m proud of.

-how did you get into death / extreme metal? do you still love it for the same reasons?


I got into metal through friends / typical teenage “social pressure”, I guess, hahah. It was the time black metal was becoming more popular, so that’s where I got my first, easy taste of it all. However, I “strayed” toward bands like Beherit, Impaled Nazarene, Possessed, Motörhead and Judas Priest pretty quickly. And I still love all those bands I discovered back then, even though my musical likings are much wider nowadays. Playing and listening to metal, still, is what feels most natural to me.

-Finland has a lot of great bands, which ones deserves to be more well know in your opinion?

I suppose most people know names such as Desolate Shrine, Corpsessed, Flame, Maveth, Krypts, Lie in Ruins, Profetus, Swallowed etc. But other than those, Mausoleum Gate, Sepulchral Temple, Hellspirit, Brainthrash (to mention a few) are definitely more than worth checking out… and never forget Pyöveli!

-what is the next step for Lantern?

Our next step is to play a good show at Kill-Town Deathfest in Copenhagen / Denmark. After that, we’ll focus on making new songs and start the slow crafting of the subsequent release, whose format is more or less undisclosed at the moment. But whatever the format will be, chances are we might try to record it with a full band instead of a duo. So keep your eyes peeled.

-a final "full of wisdom" sentence to end the interview?


A sentence full of wisdom? Well, maybe that wisdom should lie more in deeds than in sentences? Anyhow, thanks for the nice interview and your interest towards Lantern!