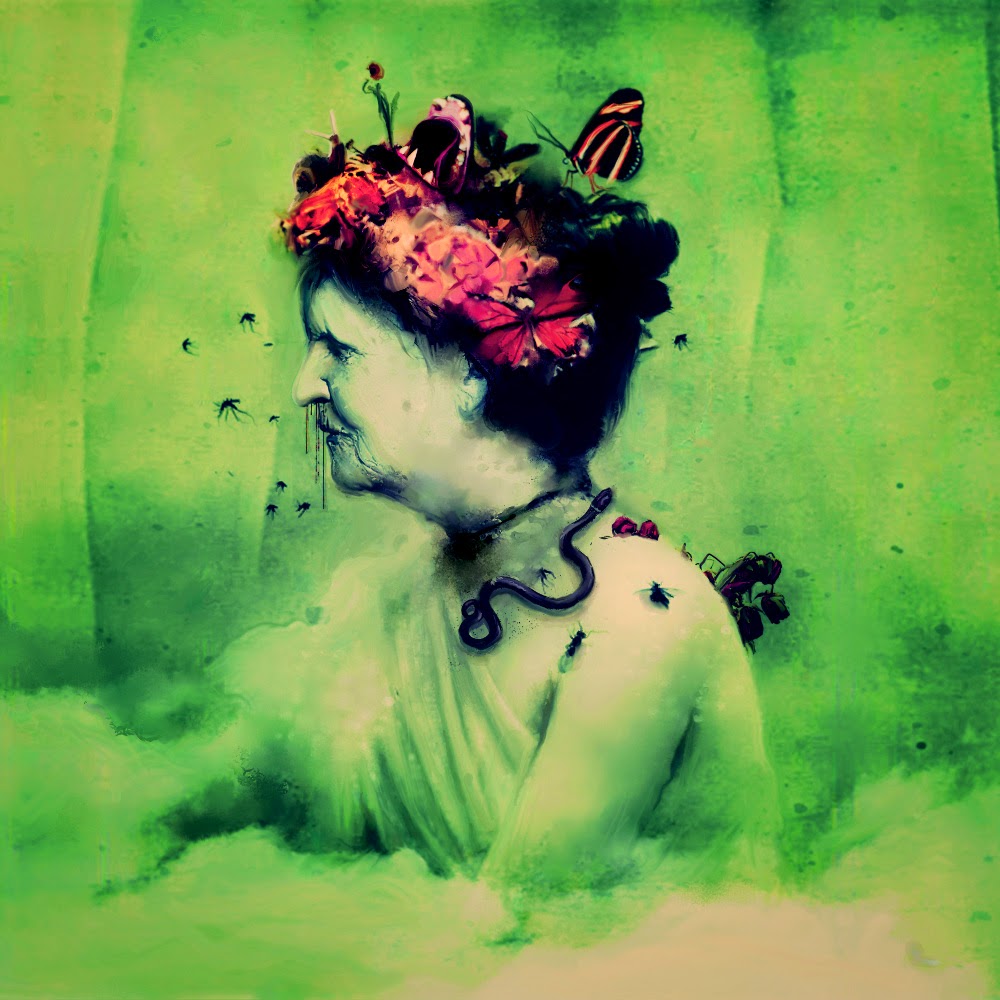 Empress rising by the swedish trio Monolord is a serious contender for best doom debut of the year, or maybe even best doom album as well. it's just so heavy. the guitars just sounds dirtier and heavier. the bass (an ex-Rotten sound handling it by the way) doing a good job in making it thickier and...heavier. thats it heavier! get it?
but it's not just the sounds it's also the good sloooowww riffing, the vocals that sounds as they are coming from miles away (or below!). but what makes it so good it's that the five songs are really crafted with taste, grabing you and letting the insidious groove spiraling in your brain. addidctive stuff really... if you're looking for a comparison i'd go for something between early Electric wizard and a darker (and less stoned trippy) Sons of Otis. but stop reading this review, just listen to it and let the low end do its dirty work...


And I had the pleasure to had their drummer Esben Willems answer to my questions (by mail), read the interview below :

-From what I hear when I listen to Empress rising and whatI read in your interviews it seems that the basic idea behind the band is the heavy dirty sound, the massive fuzz, is that correct? Something else to say about the birth of Monolord?

(Esben Willems)
You're spot on about the sound reference, we always aim for the gritty and compact heaviness, hopefully without losing the dynamics in our music. With that said, we would never limit ourselves to merely a sound, so of course we put a lot of effort into writing songs we like to play, and which can stand on their own live. A cool sound is fairly easy to generate, as I see it it's all in the songs and the performing of them. I think far too many are getting lost in the gear, thinking that the gear itself possesses some kind of mojo, but it's all in your fingers. Gear can't make music, that would be shit scary. Or muzak.
Regarding the start of the band it all came from doom jamming between rehearsals with me and Thomas' boogie band Marulk. It developed into a side project and soon we realized we wanted to go full throttle with this. I'm happy we did.


-One thing that strikes when listening to Empress rising is that heavy fuzzy sound. there's loads of doom bands nowadays but in a way you managed to "out-doom" or "over-doom" many of them. what's the secret?

Over-doom, those are massive words, thanks! I don't believe in secret tricks or magic solutions much though, we honestly just went strictly by our own ears producing this album. Our influences range from grindcore to the smoothest singer/songwriter stuff, and then some, so maybe that's one of the reasons the album didn't follow the doom dogma. As I mentioned, we just aimed for what we thought was the heaviest possible. I'm a sound tech as well, so we recorded and produced the album ourselves, which could be another explanation to what we feel is our own sound.


-Are the songs on the album the first you wrote as a band or the best among the ones you have written?

The three of us have been playing in bands and writing music in all of them for more than 20 years, so it's hard to say when one project starts and another one ends. The songs on Empress Rising are a mix of brand new jams and riffs that are 10 years old, as I think good music should be like. But as always there are more songs written than what ends up on an album, so in that sense these five songs are the best ones we have written as Monolord, yes.


-What is the usual process of writing for Monolord?

Musically, Empress Rising is mostly based on riff ideas by Thomas, but we all write songs. Usually, one of us takes a riff or a rough song idea to our rehearsal space and then we finish the song together. Sometimes it ends up almost identical with the original idea and sometimes it ends up with an entirely different song, so there's no specific formula to the process. In fact, we also put a lot of effort trying not to repeat ourselves too much, however contradictory that may sound in a genre like this.


-Which song or track in Empress rising is your favourite, and why?

That all depends on when and where I play it, or listen to it. I'm really proud of the entire album, as we all are, so I like it from side A to side D. Pounding the intro to Icon is just as great as when we get to the last part of Watchers of the waste, which is just as sweet as when our collective groove starts in the title track, and so on.


-What about the lyrics?

The same goes for the lyrics. Our first bass player and singer Danne Palm (ex-Marulk) wrote the lyrics for the title track and Thomas wrote the rest and I really think they did a brilliant job. They mostly deal with dark forces in humanity and stories of supernatural beings taking over, but the final enterpretation is up to the listener. We're all morbidly fascinated about the sinister sides of us humans; manipulative religion and politics, corruption, narcissism and general stupidity are neverending sources of inspiration, whether the lyrics are about fictious worlds or our own, real one.


-Apart from the obvious Black sabbath, which bands were more influential for you, either for the music or for other things? I'd say your music reminds in some ways Electric wizard, was it an influence?

We listen to and are influenced by a lot of bands in a wide span of genres. Of course Black Sabbath, Electric Wizard, Sleep and other bands like them was and are big influences, but so are tons of other bands we've listen to through the years. On Empress Rising you can find references to both Tom Waits and Entombed, to name a few, but I think you're always influenced by everything you've liked to listen to, regardless of if it's purposely or not. If you dig deep enough, I'm sure there's a nursery rhyme in there somewhere, haha.


-Which recent "heavy" bands would you recommend?

Damn, that's a tough one. We're all manically curious music consumers, so a lot of bands flow through our speakers, all the time. But right now, when I'm writing this, Crystalline by Hark is rotating on my player. I've never heard of the band, but a guy at a local record store told me about them and I thinks it's a fucking brilliant album. I'm hoping to see this trio live sometime.
On top of that I just have to mention our fellow doomsters Mammoth Storm, that's pure torch blower heaviness. Hopefully we will be touring a bit with them, so that's gonna be a sweet ride.

Excellent question. I would like the live scene to thrive, for many reasons. I love going to concerts, for me it's the ultimate music experience. The bands should get paid properly for the hard work so it would be possible to make a living touring, simple as that. For most bands now, the reality is that you have to keep a full-time dayjob just to pay your bills, on top of delivering albums and live shows that require your full-time dedication to a band. Since the dawn of the internet it's really easy to produce and spread music worldwide, which in turn means that noone can make money on albums, they're just a portfolio for the band to reach out to fans. So for bands being able to keep making good music, they need to get paid to play live.


-What is planned for Monolord in the coming months? are the songs for a future album already written?

We're writing and recording material for pre-production of the next album right now. A lot of loose ideas and outlines to songs and a lot of more or less finished ones, so I hope we won't disappoint anyone when all songs are written and properly recorded.
Other than that, we're planning to get out on the roads as soon as possible. The how, when and where will be revealed as soon as anything is set.

Not much more than we're itching to get on stage again, as soon as possible!