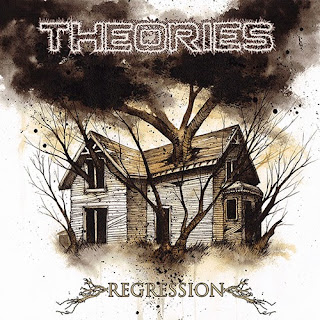 Three years ago I reviewed Theories demo and asked them a few questions about the band and it's first steps (Read the review / interview HERE). I'm now pleased to see how they confirmed their potential with their first album, Regression, released by Metalblade records! well done guys! it sure is deserved.
how does Regression sounds? they still are into death / grind territories (with trash, crust, hardcore elements in the mix, they clearly are not trying to sound like a specific band or scene) but they went further in focusing even more on the songwriting (with a bit of melodic parts, not too much) than on the brutality (but brutal it still is). To support this direction they have a quite clean production and maybe some would find it too clean and overproduced. Yes, but it's doing a good job in stressing how the songs are as "catchy" as death / grind can get, with memorable riffing and good grooves. It's quite a good balance. The riffs are simple but efficient and the drumming, more technical than usual, is really a prominent element in their music, for the better. Regression is a strong and promising first album.