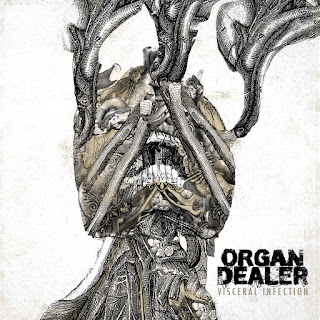 Organ dealer is a death / grind band from New Jersey and Visceral infection is their first album. They already get some attention last year with a two song demo that was excellent. Are they confirming the good impression they made then? Yes they are, Visceral infection is a solid and enjoyable album for anyone into death / grind.  It has some old school grind elements, parts with hardcore riffing and groove, but the massive production and the parts with more complex riffing and death metal brutality and groove put them in the modern grind category (yes "gory" indeed!). What I like is that they keep a good balance between very fast and the grooves, and between more straighforward crust / HC riffing and more complex parts. It's never sounding like a heavier math rock band or super techy metal. It still is grind. And while borrowing good elements from death metal (riffing, groove) they avoid the gore vocals extremeties, in favor of more "classical" grind vocals (which I prefer). They did a really strong first album and I really hope I'll be able to hear them perform it live.