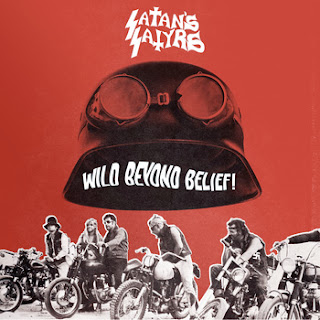 Let's imagine The Stooges recording some medleys with songs from Electric wizard and Discharge between two Raw power sessions for the soundtrack of a B movie about the adventures of a satanist outlaw biker gang in 1969. would have been cool isn't it? (of course Electric wizard and Discharge did not exist at the time but well..). I have the impression that on their first album, Wild beyond beliefs, Satan's satyrs (from Virginia) are trying to catch a sound and a vibe that could be close to this fantasy. anyway they did a good job with a very enjoyable result! it manages to evoques the birth of both punk and heavy metal in the psychedelic times but without sounding really like a retro band (this kind of heavy fuzzy noisy guitar sound did'nt exist before the nineties!). this album is released by Bad omen records a promising new record label from London that is specialising in dealing some fresh early heavy metal sound.

ride it on their BC page!