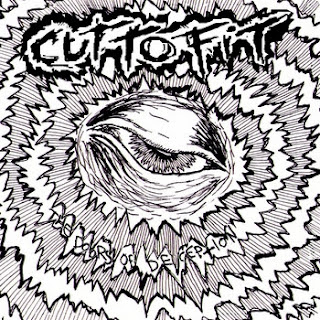 Cut to fit is a finnish grind band that is around since 2008. The doors of deception is their latest release (for the previous album, see my review HERE). the album is all about grind, the old school way, but faster, the typical (and so cool!) punk sound / vibe and the ridiculously fast parts. and by fast I mean not fast like a grind band, I mean fast for a grind band! so you know, really fast then.. and at the same time with a really loose and spontaneous feel, not the cold technical stuff.
if you're into grind you'll love it!


their singer answered to my questions by mail, read it below :

-can you go back to the origin of the band and tell us how it happened? what was he project at the start and how have you evolved since the beginning of the band?

Everything great begins with something less great. I was struggling with my obligatory civilian service in 2008 and was denied all the welfare benefits my peers got (no one payed the rent, for example). I kept telling everyone I'd like to have grindcore band, and I wanted to include my brother, since everyone just kept mocking his skills as a guitarist. Yeah, he did suck, but this was sort of "our thing". I wanted to be careful with who we ask to join the band, but he went drinking with Vili and the next morning he just told me Vili would play the other guitar. Three of us had a shitty proto-band called Havoc Supreme with two other good friends of ours as kids, so it seemed fitting. We found our drummer Miro from the internet. We started "writing" songs in the first rehearsals, and in two or three weeks we had recorded the first demo.. The biggest changes came in 2010. First Vili quit the band. Then Miro got tired of playing gigs and quit. We had an upcoming Obscene Extreme show we did not want to cancel. Eetu went drinking with Vili again and told me the next morning that he'll be playing drums from now on. It  was one of the best things that ever happened.

Yeah, we have played in shitloads of other bands too. At the moment Vili plays guitar in Inferia, a band older than himself! Eetu plays in a punk band called Zyprexa, has some sort of stoner project and whatever, I just do my own semi-acoustic voodoo-shit while I wait for them to have enough time to focus.

-what do you want to express through your lyrics?

Kinda big question.. We have 116 songs right now, if my memory serves me right. Mainly it's sharing my perception of this reality, but the focus seems to change on every album. I guess it all just paints a picture of our personal growth, my fears and frustrations and things like that. I find it quite hard to connect with most human beings, so there's quite a lot of some sort of feeling of social exclusion. But I am not misanthropic. I love people on the paper, but the reality of their social mind games usually just disappoints me. In one review we we're referred to as "beatnik grinders", I think it seemed quite fitting!

-what about The doors of deception? In your opinion how is it different from your others records?

Well, I think they're the best songs we ever had, but we kinda rushed it. I'm not going to tell you we won't do that mistake again, because I know we will. We're impulsive and impatient. It would have been way better if we would have recorded it live. Still, I think those songs just CRUSH! Of course we are still on our way to that "own" sound, I think the next album will be way better. But we prefer playing live, and albums are more like checkpoints in Crash Bandicoot, or something.

-The doors of perception features on the list of my favourite grind records in 2013, what would be your own list of favourite grind (or related) records released this year?

I always have trouble remembering which albums came which year, but I'm quite sure these were all last year:
Feastem - Avaritia Humanae
Nistikko - Kehä
Spawn From Deceit - Woven Promises, Unravelled Victims
Famine Year - Ja Kaiken Kruunaa Kuolema
And of course Magrudergrind's self-titled is the best grind album of any year!

-do you think grindcore (or grind related music) can be undestood as a reaction against the recuperation and commodification of punk?

I'm not sure about that. In many levels it has helped grindcore, too, to flourish. When the "marginal" things grow bigger, the smaller things in their marginal get more attention too. Personally I'm quite happy about the fact that people who listen to music seem to be more open to new things than few years back. I don't believe we'll ever get our living out of playing grindcore, to us it's more important to have some people who would still be eager to listen to this noise. I acknowledge that being independent lets you have certain creative freedoms..

-do you think that the DIY way of action could be a global alternative or do you see it more as a practical way of growing for an underground band?

Depends entirely on the scale of things. Aldous Huxley predicted in his Brave New World Revisited, that this world will eventually be so bureaucratic it will stumble on it's own impossibility. We are pretty damn close to that point, and it has already sprouted a sort of social microcosmos, where people actually get tired of bureacracy and start doing shit themselves. To me this is always a hope inspiring sight, but then again here in Finland things take much time since majority of people will let the state fuck them sideways for years before they'll decide they are sore enough to get mad. Globally there's kids who claim to have solutions for cleaning pollution from oceans, more efficient electric cars and greener technology, but the dinosaurs of economy keep them from getting funding in fear of change in the global status quo. But the generation of revolutionary ideas (and ideals) is there, waiting. We're not doomed yet. We're just waiting for the dinosaurs to die.

-I like the fact that you have a real website for the band, with many informations, links, writings, etc,, some thought about it?

I think it's a great way to gather things together, instead of having just a boring chickenshitfacebookpage that won't even work, and reaches only those who are using the service. We use Facebook mostly to write something totally irrelevant and moronic or confusing on our wall.. And when it comes to writing, well, as you might have gathered I write quite a lot, so it is a way of digging deeper into some themes that are involved in our albums. Since you only have something like 8 or 10 verses, you really need to cut your thought to fit the songs, too.

-I read that you're interested in psychedelia (at least one of you!), do you relates it to playing grind? If so, how? Or do you just keep your “psychedelic side” for your other musical project(s)?

I think my interest in psychedelic, consciousness altering experience is pretty much related to grindcore too. Since I don't do any drugs (The rest of the band does whateverthefucktheywant!), our shows are my "drug". I black out instantly when Vili counts the first song in, and the next thing I usually actually realize is lying backstage, out of breath. Again, Huxley helped me understand this thing better. It's the lack of oxygen kicking in, combined with adrenaline rush and somewhat spiritual experience of the pure noise and resonance of the guitar amps and drums.  Also we think intuition is the key of writing music, most of our songs are played live in their early stages, when we usually fuck them up, and then we realize a minor mistake, that actually makes the song even better. Probably not the most conventional approach to writing music.

-which bands were more influential for you, either for the music or for other things?

For me personally Neurosis, Tom Waits and all the music Peter Dolving has done. I think we're all influenced at least by Magrudergrind, which we had the honor to play live with, Phil Anselmo's several projects, which we grew up with, and Sepultura, since they are just the best heavy metal band in the world.  We listen to all kinds of music, hip hop, punk, blues, jazz, whatever! And of course it always affects you somehow.

-which bands from your area would you recommend?
The forementioned Nistikko, Spawn From Deceit, Famine Year and Feastem, and some other great groups like Psykoanalyysi, Nothing More To Eat, Lurk, Midget Fetish, which is not a porngrind band, though the name would imply so..

All sorts of experiments are always welcome. Music evolves with people, and I think we are on the edge of something new and interesting.

-what is planned for Cut to fit in the coming months?

Hopefully we'll get abroad very soon, we're also working on new songs and hopefully get to play shitloads of shows.

If you want to have us play where-ever-you-happen-to-be, contact us at cuttofit@windowslive.com, we have no sense of self-worth and we're cheap.