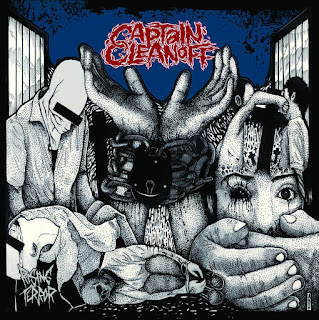 This grind album really takes you by storm! and you will like it!  Rising terror is the second album from Australia's Captain Cleanoff (although they formed in 1997). One hundred percent grindcore, old school (Napalm death comes to mind, not only because of the cover art) and uncompromising. Captain Cleanoff manages to sound at the same time very punk and old school grind and very fast and brutal. Riffs and rythms keep it simple but it's really not at the expense of the overall agressivity, it sounds enraged through and through. The raw and powerfull sound, the speed, and the very vicous vocals playing a large part in it. And at the same time the trash / punk riffing have a very direct, brutally "catchy" quality, making this all out grind assault very memorable and enjoyable. after the slower song at the end stops you fell a bit disoriented by silence a few seconds... and can't resist playing the album again! this album, released by the cool grind dealer Blastafuck is easily one of the grind highlight of the year. excellent stuff!