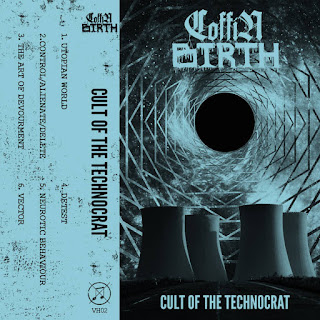 Cult of the technocrat is the new tape from australian grinders Coffin birth. As expected it is very good suff (read HERE my review of the previous release, and HERE the interview we did last year). The tape (in a limited edition of 100 copies) features six songs clocking in 8 minutes in total. Maybe the old school component of their music is even more present with a big Napalm death influence and good ol' death metal as well. It's very classic grind, with a very abrasive sound and good old school grooves. They really do justice to their influences, giving it a fresh and wild feel, the songs are good and played just how it should. If you're into grind are also into the more primitive and punkier side of death metal (with more speed!) I'm sure you'll really like it. my only complain is that it's too short. It's time to release an album guys! we're waiting for it!