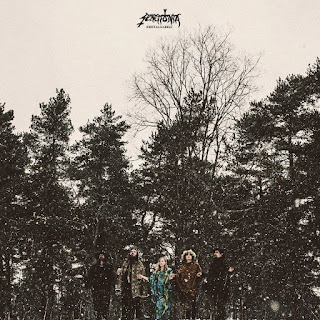 Listening to the first Seremonia records I thought they were ok ( I should have paid more attention, because they already showed the band had a good potential...). But with Kristalliarkki (released with Svart records who are really doing an outstanding year!) Seremonia really took it to a higher level, gaining another dimension. With Kristalliarkki they really get better on everything, from the production (which is now great), to the cover art, but of course most importantly with the songs itselves. Their music is still based on a kind of proto-hard rock / sixties garage rock with some psychedelic touches and keyboards parts. But they added more diversity and displays on this album a greater level of creativity. Seremonia is now without question a really unique band. The album starts with an intro with some free jazz like drumming / percussions and choir like vocals and a bit of sax. And the album ends with a wild garage outro! and in between you have some hard rocking songs with a psychedelic flavour, some psychedelic doom with saxophone, some finnish folk / prog... imagine a jam with The Doors, the Stooges, Hawkwind, Black sabbath, Sun ra and Deep purple, with a girl singing in finnish (the vocals are great and add to the originality of their sound). The songs, even the less complex, more hard rock based ones, are filled with twists and suprises, with the keybords parts, the vocals lines, the guitar riffing and leads, the rocking but subtle drumming, a bit of flute, or some saxophone... The album culminating with the title track, an awesome 60' psych' doom 14 minutes song.
The album sounds very fresh and suprising, I already listen to it many many times and do it with an always renewed pleasure, it's so well crafted, full of nice details, and at the same time sounding spontaneous and lively (it's often really rocking, with a wild garage feel).

I really recommend you do yourself the pleasure of trying it. A highely exiting and enjoyable album, bursting with inventivity.

ps : oh, and don't fail to listen to the single called "Hasiskulti" they released with the album (but the two songs does not feature on the album!), those two songs are also great, especially hasiskulti!