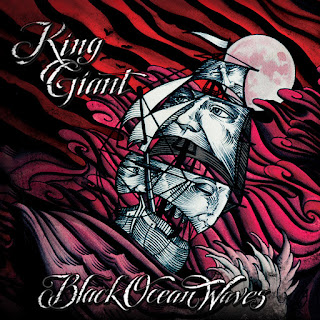 King giant is a great heavy metal band from Virginia (USA). Their previous album, Dismal hollow, back in 2012 was one of the best heavy metal of the year and I listened to it many times (read Here the review and the interview we did). They are now back with Black ocean waves. It's another awesome album that I also really enjoy listening to. I hope it will help them get the recognition they deserves. The album starts with a good instrumental and from the beginning compositional skills and good guitar works are on display, then the first songs starts and you hear how good the singer is (clean but powerfull heavy metal singing) and that the rhythm is good at doing what is needed to make it groove. Great traditionnal heavy metal with just a touch of stoner sound to add more heaviness. I mentionned the good start of the album but it doesn't fail to end on a high note with a classy 8 minutes long closing epic. Once again King giant are really strong at heavy, epic and groovy songwriting. If you need some comparison we could say they are somewhere between Iron maiden and Corrosion of conformity. Don't expect some important evolutions compared to Dismal hollow, the new album carry on in the same tracks, but I think nobody will complain, both albums are great, the band found their formula and are really good at doing it.  If you're into this kind of music I can't recommend it too much.