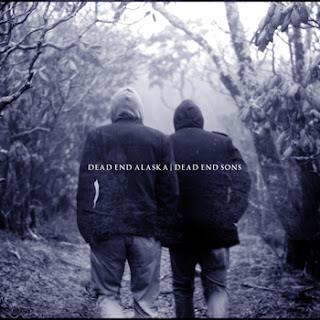 A strong point for both bands is the vocals, the singers having a good ability at passing emotions and intensity through their singing. Both bands are also really good at writing simple, memorable and good songs in a good and honest staight to the point rock fashion.
The split is five good songs, ending with a cool acoustic one. recommended!

you can listen to it on Bancamp.


Josh from Dead End Alaska kindly agreed to answer to some questions so you can read it below :

-can you present Dead End Alaska, how did the band formed and its evolution up to now?

DEA formed in the Summer of 2010 after the disillusion of most of the members former band. I know this is said a lot but this band really does consist of good friends, 4 out of 5 of us went to the same high school and have known each other since well before that and have only had one member change.  We formed with a very unclear vision of what we wanted to be, torn between different influences and a stylistic change that was occuring in most of us. For the first year we really just wanted to play a lot of shows, not really knowing where we fit in musically we just played every type of show that was presented to us. In a way this was good because it let us mature and figure out what we wanted to be and now we have a pretty clear vision of where we want to go musically.

-how would you describe your music?

-do you feel like being part of an emo/scremo scene?

-how did you get in touch with Dead end sons and decided to do a split with them?

We actually found them by googling our own name through facebook. Our guitarist Kyle showed us them and we thought they were awesome so I (Josh) decided to send them an email and talk to them about joining us for the first part of Friends and Family.

-what about the making of this split, how the songs were written, recorded, etc.?

The songs came together fairly fast for the split actually, which was really surprising because usually we work on something for 2 weeks then throw it away and that process repeats until we get something we all like. Our guitars usually come up with the general framework of the song and then we come together to write and fill in the blanks. Once we got them all hashed out we went to Easy St. studios in Simi Valley where we recorded our last demo "American Made Bastard Boys" in Nov. We just took one day to knock out both songs and a bonus song. We always have a blast there because the owner Jules, rules. He has some creative ideas and is just a hilarious dude in general.

-what can you say about the lyrics of your songs?

In our music we really like to focus on lyrical content, we think it is the most important thing about a song. Both Kyle S. and Josh write lyrics and in Friends and Family we decided to write about just what the title suggested. Wasp Wars is a follow up to the acoustic bonus track on the split, "acoustic Koala" which was a remake of a song on our last demo. Both songs having to do with a family struggling with substance abuse and the personal conflict and realizations that come along with having parents who have substance abuse problems. One song being about a mother and the other a father. Forest Fox was a beautifully written song about a close friends who joined the military and started encountering self doubt. The song is a reminder of the strength friendship can give you and how bonds like family and friends are what matter.

- the split is called Family and friends vol1, are you preparing a volume 2?

Yes, we are planning a part 2 now which we hope to announce soon. We have not yet found the perfect partner for the split but the general concept of Family and Friends is to have two parts, the first focusing on the more melodic side of our music and volume two will focus more on the darker side of what we can convey. With this split series we are attempting to explore both sides of the post hardcore/screamo spectrum and really see what areas we can touch and pull off.

-which bands from your area would you recommend?

SO MANY! Troubled Coast, Love American, Wolves, Life For A Life, Trap Her Keep Her, City Somewhere, Bad Days, Spirit Fangs, Stay Wild, My Iron Lung, and so so many more!

-want to add something?

Biggest thing you can do to help the music scene is support live music. I know there is a lot of music out there and it can be exhausting to try and support everything you like but it means so much for the scene for people to go to shows!