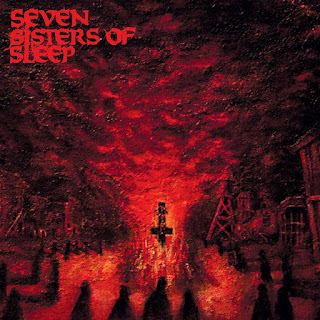 Seven sisters of sleep comes form Orange County, California and have been taking the sludge scene by storm in the last couple of years. They released a first self titled album with Southern lord in 2010, a split  with Children of god last year on A389 recordings, and now a self titled 7' also on A389. Three really inspired and crushing records. The recipe is classical sludge but with some more brutality added (even death metal elements like blastbeat parts here and there). Every song is well crafted with cool riffs and rythmic parts bringing a lot of groove with the heaviness and brutality.
Clearly one of the best recent sludge bands!

withness it on the SSOS A389 BC page