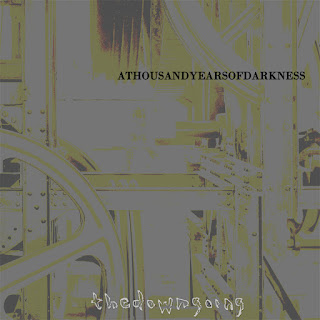 Athousandyearsofdarkness is the new 12 tracks 10 min record by aussie grinding band thedowngoing (HERE's a review of their previous record with an interview). It will be release the 20th of july. They managed to keep their "furious maelstrom of chaotic and noisy as fuck grind nightmare" sound while at the same time writing songs that sounds a bit more like songs, maybe because it's maybe more focused on guitars and more straight to your face (or maybe I'm just getting used to the amout of violence they deliver!). anyway the damage done is still huge and awfull and it's great! I think it's my favourite thedowngoing record yet.

You can grab it on slim CD or just listen to some songs on their BLOG and also on their BC. Highly recommended for sonic apocalypse lovers!

Mathias Huxley answered to my questions about this new record, the tours and the next thedeowngoing releases :

-you’re releasing a new record called “athousandyearsof darkness”, what can you say about it?

ATHOUSANDYEARSOFDARKNESS is 12 tracks, ten minutes and change. Big noisy guitar, blastbeats, screaming and of course samples. We worked with Jono Boulet on ATYOD, and he really pushed us and our sound further, and i think it shows with the final product, as it takes the foundation laid down with 2011's Untitled EP and builds from there.

-seems to me that the songs, even if it still sounds really chaotic and noisy as fuck, are more guitar/riff s focused, is it just an impression?

We've been together as a band for a few years now, and feel that, with regards to song-writing, that we have taken some bigger steps this time round. There was more focus on each song, and trying to work with the structure and pacing to create some unique moments, while still trying to maintain the cohesiveness across the entire record.

-the lyrics (printed on the record booklet) sound a bit like desperate/apocalyptic poetry, what can you say about it? How was it written? Do you write only for thedowngoing or not only?

The lyrics are written with the song, and start forming and taking shape as a song moves from the creative process into the recording process. I suppose the lyrics are an extension of the music and noise, offering some personal insight into the aural suffering. Apocalyptic poetry is quite fitting, really. I only write for tdg and personal enjoyment.

-have you already played the new songs in live shows?

We're playing the majority of the new songs on tour at the moment, and are having a blast watching the reaction from our fans. The new songs are so much fun to play live, and roll along with an intensity that keeps both of us on our toes.

-apart from the tour what is planned for thedowngoing?

thedowngoing is doing an Australian tour through July and August. In the coming months we will be featured on Blastbeat Productions Monomaniac 7" Compilation series, and are planning a split cassette tape with WATER TORTURE for our USA tour with them and CLOUD RAT in November and December.

-have you discovered cool bands recently? Which is your favourite record for 2012 yet?

There has been some sweet new grind dropping in the last few weeks, but my top release for 2012 would be Shlohmo's Bad Vibes... perfect laid-back tunes for driving down the freeway on a beautiful day.

-something to add in conclusion?

Swing by THEDOWNGOING.BLOGSPOT.COM from JULY 20th to stream/purchase/pirate ATHOUSANDYEARSOFDARKNESS, or check out GRINDCOREKARAOKE.COM where it will also be available.
à 21:30