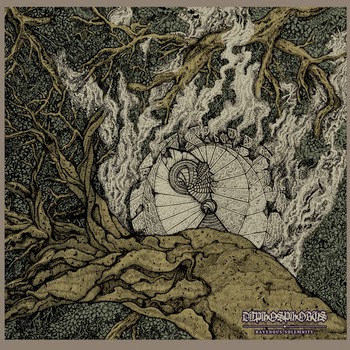 Dephosphorus is a band that likes to surprise and we are used to hear them evolve, adding new elements, enriching and refining their sound release after release (see HERE the different reviews and interviews related to them in Blasting days). when I read that they were releasing a double LP I thought that a very ambitious, more complex and progressive album was on the way. But with Ravenous solemnity i've been surprised to, well...not been surprised that much this time. it's more a subtle maturation than a new evolution or experiments. maybe it will be for next time. anyway it's ok because it's another really good, finely crafted and finely executed, album. the songs are shorter and I'd say more straighforward than in Night sky transform and at the same time the grind elements are again less present than it was in Axiom. we could say that most of the time it could be described as a mix of dark and raging hardcore and black metal with some melodic and epic touches. with really good and personnal vocals, good and creative riffing, and the new drummer is doing good as well. that's what I'm saying for the moment, but I suppose that, like it was with their other releases, after some more listen I will discover new subtilites in the songs and in the overall atmosphere of the album. anyway I highly recommend you try it and make your own opinion it sure will be worth it.