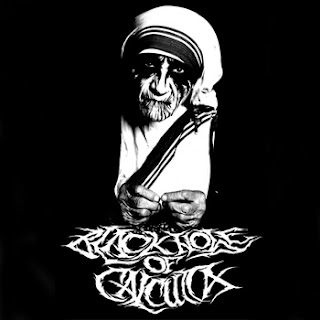 If you like grindpunk and black metal mixed with crushing results then this band is for you!
With their first self titled record released in January 2012 Black hole of Calcutta from Seattle/Portland succeed brilliantly in mixing every kind of musical extremism (grind, punk, black metal, sludge, etc) without losing in cohesion and identity. So what you get with this record is twelve short good songs filled with speed, heaviness, old school black metal or crust riffs, blast beat, d-beat, and pissed off vocals. All that makes it a pretty cool and intense record!

Check it by yourself on their BC page.


They accepted to answers to a few questions (thanks to them!) so you can read it below :

-can you present the band, its members, what was the project at the start, how it evolved etc… ?
Currently the band just consists of 2 members Ian and Jesse.  The other members Ben and Spider are still kind of involved also but only when they are available since we live all over the West Coast.
The project started with all 4 of us, just playing fast music.  We soon had 14 songs that we recorded.  At that time it was just a fun project but not as serious.  We didn't know what to do with the songs so we asked a few bands that we enjoyed if they would be into doing a split 7" with us.  To our surprise, quite a few of them agreed.  From then on we were a serious project.
-what can you tell about your self titled record(s)?
Hmm, We recorded them with our friend Scott Barwick.  And we're happy with the way they turned out and stoked to be involved with the labels and friends who have helped us out.

-what about its cover artwork?
Everyone is going to have a different take on the art, so I don't want to go that into detail about it...  But the art for our first LP was done by Meg Adamson.  She is an amazing artist and friend from Portland Oregon.  The Mother Teresa art was done by Matt Loomis.  He is another amazingly talented person who we have known for a long time.  He has done all the art for our other band The Makai.
-I read on your blog that you plan to release a split with Magnicide, that’s exiting, when will it be released? How did you get in contact with them?
Magnicide rules!  They are a great band and such nice guys.  We are so excited about that release!  We got in contact with them by just writing them an email one day, we communicated and the split just fell into place.  We've been planning that record for a long time.
The release has been taking a long time because one of the labels, Morbid Reality, has had some financial trouble.  But he seems to be back on his feet, so hopefully we will get the record pressed soon.  If no progress is made soon, the readers of this interview should hit up Morbid Reality to see what's up.

-your music sounds a bit like a fresh and dynamic mix of different extreme musical style, was it a choice from the start to do that, or is it just what results when you play music together? Has it something to do with the fact that you played in many other bands?
Thanks!  I'm glad you like it.  I wouldn't say it's too conscious of an effort. I think it just comes from listening to all kinds of styles.  I love grind, power violence, black metal, hardcore and everything in between.  All those styles go so well together, I don't see a reason for them to be confined to a genre.

-your lyrics are mostly about social issues or dystopia. Do you think the occupy movement goes with a growing critical awareness in the US? What is your hope for the future?
Yes, I think the occupy movement is a part of the growing social awareness in the country.  The occupy movement was growing but was basically shutdown and hasn't really regained its strength it had.  I think people are slowly becoming more aware.  It's really sad to think about, but there are so many problems that are fundamentally horrible.  It seems as though more people are beginning to realize this, but doing something about it is another story.
I could write forever on my hope for the future.

-is your critical stand a drive for playing extreme/pissed off music?
I think our music is a great release for these feeling.

-do you fell like being a part of a scene? Is it easy to find places to play in your area? Looks like there’s many good band coming from Portland or Seattle.
I guess we're part of scene, but it's hard to define it.  I think we don't think of it too much these days.  It's more like friends.  We've been doing this so long through various bands we know a lot of people who are involved in extreme music and the diy underground.
There are tons of good places to play in Portland and Seattle, and great bands too.  I would say, houses and basements are our favorite place to play over here.  Portland especially has a few great spots.

-what have you planned for 2012?
We actually don't have any plans right at the moment.  We just did those 2 lps and we have a few other releases coming out soon that have been taking a while.  But other than that, we're just writing songs and trying to figure out what to do next.  We've got quite a few tours that we're talking about, but nothing is in the works quite yet.

-when are you touring Europe?
We would love to!  Right now for us it's a money issue and trying to figure out what time is best.  It's expensive!  But we will, hopefully soon.  We always talk about it, there just needs to be something to set it into motion.
-something to add?
Thank you so much for the review and interview!
If anyone out there wants to help set up future shows/tours, help release a record, or just say hi, contact us at blackholepunx@hotmail.com
à 20:28