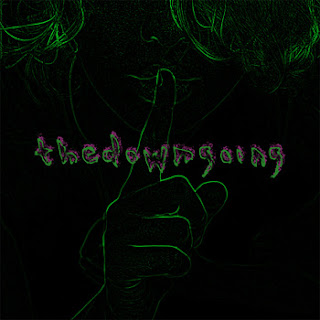 thedowngoing is a terrific grindnoise duo from Australia that remembers that grindcore is about pushing the boundaries. And they're doing a good job at it!
Some would say they don't merely push the boundaries, they pulverize it! And those would have some good reasons to says so!

The results?
Kicking you far away from your comfort zone, as far as it is meant to be! And doing it with a vicious groove that makes you ask for more!

Now that I gave you a warning I invite you to succumb to it, listen/download their last EP on their grindcore karaoke BC page, HERE.

You can also check what happens if you dare venture on their blog, thedowngoing.blogspot.fr/


Mathias Huxley for thedowngoing accepted to answer to a few of my questions (thank you Mathias!), so you can read it below :


-can you tell us the story of the band?

Muzz and I first met while we were both studying music at TAFE back in 2007. Shared musical preferences led to us performing together on class assignments (Slayer covers), and when the course had finished, we just continued to jam together and started writing our own material.

-is being a duo a choice or more a result of circumstances?

At first it was a result of circumstance, we’d tried jamming with a third member a few times but couldn’t find the right person to round out the band. So in the end, after several months of jamming as a 2-piece, we realised that we didn’t need a third member, as we had found a sound and direction we were both happy with.

-how are your live shows?

Noisy, fast and loud.
I replicate the samples from the recordings using a sample pad, which I play with my feet, while handling guitar and vocal duties while Muzz blasts away behind the kit. Anyone expecting to mosh along is going to be disappointed.
Two memories stand out in my mind from our shows, this one time when we made a classically trained violinist cry because we were “ruining music”, and this one time where a guy shot up heroin at the back of the room.

-is bringing noise and samples into the grind a way to make it sounding different, or just you like grind AND noise and wanted to do both at the same time instead of choosing one or doing it in different bands?

The main purpose of the samples is to provide some insight into the aural carnage, offering reference points amongst the chaos. The noise influence is due to just wanting to push ourselves and our sound as far as possible, it wasn’t so much a conscience decision to be “noise-grind” or anything, more just how our sound has come together through years of playing. We certainly weren’t as “noisy” when we started out, so maybe it’s a reaction to the market saturation of triggered, highly produced garbage that gets passed off as grindcore nowadays.

-your music is really noisy and chaotic, do you think traditional grind is too straightforward and sometimes a bit boring because of that?

There seems to be a lot of grindcore bands nowadays just playing it safe, content to continue putting out records that maintain the grind ethos without expanding on it. It all seems rather redundant to me, since grindcore is about pushing boundaries.

-on one thing you follow the grind tradition, less than one minute songs! Do you think it helps keeping it intense? Or is it to have more possibility of drinking beer between the songs? or was it for being sure to be featured on one of the coming Monomaniac records?

Grindcore is for the kids with the ADHD, right?
I’ve never given much thought to the length of songs. My song-writing process just involves refining the songs until they hit with the most impact, and part of that process is cutting away unnecessary fat and repetition.
And funny you mention the Monomaniac Comp Series, because in true tdg fashion, we decided to cram 3 tracks into the 60 seconds. Never ones to conform

-what about your coming record?

It’s 12 tracks in just over ten minutes and in my opinion is way more abrasive than the Untitled EP. We have to thank Jono Boulet from Snakeface for recording, mixing and mastering it for us. He really pushed us and got the most out of the recording. We’ll be releasing it in Australia to coincide with our tour in July/August. More details about an international release in the next few months.

-you’ll be part of a coming US tour with Water torture and Cloud rat, tell us more about it?

Super stoked about this. Both Water Torture and Cloud Rat and amazing bands. We’re looking at something like 40 dates in 45 days, touring with Water Torture for the first couple weeks down the East Coast and through the Midwest, and then hooking up with Cloud Rat for more Midwest, some Canadian dates and West Coast shows.
Looks likely the tour will kick off early November, so we’ll have more details on the tour in the next few months as we get it all together.

-which are your favourite grind bands?

-how is the aussie grind scene?

There are some great Aussie grind bands kicking round at the moment, the established names are still going strong (The Kill, Agents, Capt Cleanoff) and newer bands starting what seems like every other week. It is funny to see how well represented Australia is on the world stage when it comes to Grind and extreme music, considering our low population. Every time we get out and play we are seeing more and more people supporting extreme music, and more bands participating in creating it. It’s exciting times for sure.

Swing by Grindcore Karaoke and take a listen to our 2011 Untitled EP, keep an eye on thedowngoing.blogspot.com for more news on our US tour and forthcoming release, and live life at 300bpm.