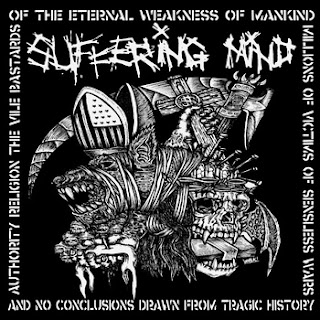 Readers of Blasting days sure have noticed that I love grindcore. And I do because of bands like Suffering mind. They are old school grindcore activists from Poland, and since they formed five years ago they did a lot to keep furious grindpunk alive, radical and intense as it should be. They also carry the anti-authoritarian stand and DIY/underground ethics of original grindcore and that's an important thing.
Musically wise it's blast and d-beat at every stage, barking like a mad dog screamed vocals, short and fast songs. musicianship and production are really good. All that makes Suffering mind one of the best band in that style. They don't invent something, but what they do they do it better than hundreds of bands trying to play this kind of music. Suffering mind don't try. they do it, and they do it the way it should.

They released two LP's (one called At war with mankind in 2009, and another, self titled, in 2010), and countless splits with many cool grind bands (for exemple a split with Phobia coming in june, check their BC page, see link below, and you'll easily see how active they are in recording splits...).