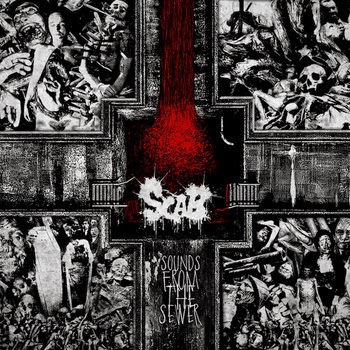 Scab is an american very prolific grind duo. Since their formation in 2013 they already released 3 albums (including this one, called Sounds from the sewer, released this month) and 5 EPs. Yet the quality is there and they even show a good dose of creativity in their songwriting, with more diversity than the usual grind. What they play is strictly speaking grindcore, the whole range of grindcore with it's different elements. taking from the grindpunk side (D-beat, some hardcore crust like vocals) or from the deathgrind side (brutality, blast beats, some death / gore vocals). Another of their strong point, in addition to the diversity in their songs, is their good use of groovier parts to balance the more straight forward faster parts. they also have funny song titles. Don't fail to discover this excellent new grind band.