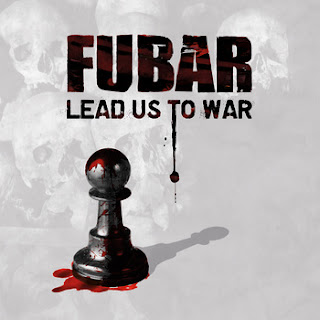 FUBAR is a dutch grind band, they are releasing their second full lenght record called Lead us to war (seven years after their first). to put it simple it's one of the best grind release of the year. to me it sounds like a near perfect mix of old school grind / powerviolence elements (for exemple the three singers vocals ar quite old school, a bit like Blockheads) with modern grind (Nasum et al.), the production is powerful without being too clean. The vocals and the grind / punk drumming have a great sense of rythm, bringing much dynamism and contrast to the songs, making it catchy and memorable and fast and brutal at the same time. well, it's smartly crafted grindcore, and that sounds really really nice to me....  and when they move into "crustier" terriory like in a few songs it works ok as well (they don't forget to accelerate again really soon!). it's a really strong and enjoyable grind record, so don't miss it!

Mark, who's playing guitar and screaming in F.U.B.A.R, answered to my questions by mail. read it below :

-how did Fubar started, was it very different from what it is now?
F.U.B.A.R. finds its origin in a project called I scream, protest! But never did anything worth mentioning under that name. With a new singer we found a new name and we never chanced line up again. F.U.B.A.R. always have been, Luc on vocals, Paul on drums, Bas first on guitar and later bass and vocals and me, Mark on guitar and vocals.
The basis of what we do has always been the same, making grindcore. The influences we put in are always chancing, but never too far away from grindcore. Most influences are from punk, metal, crust, hardcore and power violence.
How we make songs, also chanced during the years. Through the years it became more and more a band effort. The first years we would write songs separately and bring them to the rehearsal. Now days we start with a single riff and we create a song out of that. Same with the lyrics.
We exist for more than 10 years now. So fortunately a lot has changed. Change keeps it interesting, to go and write new songs again and again.

-why seven years between your previous full lenght and the new one? what about your previous releases, splits, EP, etc.?
The years flew by. And there was always the opportunity to do a split with a band we really liked. You do not say no to a split with Splitter, Lycantrophy or Blood I Bleed in my opinion.
That’s why it took so long for us to find the time to make a full length. We had to make loads of new songs for all are past splits.
And in my opinion if you want to be in a grindcore band, releasing split records is mandatory. Same goes for releasing vinyl and having some old tape with rehearsal recordings out. No mather how professional a scene can get, never forget where you came from. And what made this scene to begin with.
But to be completely honest, I think we will be releasing our next full length in about a year / year and a half from now. We are writing new songs, and things seem to go pretty good.
So no split records in het near future. (o, I just remember, we just released a split seven inch with Embalming Theatre. Same recording session as Lead us to war).

-what about Lead us to war, how was it written, recorded, produced?
It started with the idea to make a full length for a change. So when we started to write these songs, we knew their destination. Normally we start to write songs without knowing the format which they will be released as. So we knew we had to make a load of songs that had keep the listener interesting for about half an hour. We wanted a lot of diversity in the songs, and I think we did pretty fine. Some real (old school) grindcore, powerviolence, crust, hardcore, and metal influences but still recognizable as F.U.B.A.R.
We recorded 24 songs with the great help of J.B. van der Wall. He plays in a lot of good bands like Dr Doom and Herder. We loved what he had already recorded. So we knew he could make the sound we wanted, and he knows his grindcore. We think he did a great job on our recordings. He made it sound the way we wanted our songs to sound and he made recording even more fun.

-which is your favourite song on Lead us to war and why?
I have a few actually. I scream protest is one of my favorites, because it really stands for what F.U.B.A.R. has done all those years. The title refers to our past and it’s as grindcore as grindcore can be to me. And I love screaming: I scream protest!!!!
Another song I think turned out pretty good is Lead us to war. It’s totally different from what we have done in the past. It clocks over 3 minutes (I think close to 4 minutes actually) We can play a song like Blended about 8 times in 4 minutes. So a very long one. But I think there will be more songs like that in the future. It shows an other side of us, our love for crust and more melodic music.

-It looks like the lyrics are something like in a "protest" vein, can you tell us more about it? what do you want to express?
I do not write the lyrics of F.U.B.A.R. I only scream them. Luc an Bas are the main writers of F.U.B.A.R. lyrics.
They are about frustrations, daily ones and frustrations about big subjects like politics of our society. Stuff that makes us angry enough to write short, fast and loud songs and scream very hard over them actually.
If you read them, I think they speak for themselves. So too little time to explain what they all are about. It must be over a 100 songs we written over the years.
You are right when you refer to them as protest. Grindcore is protest in my opinion.

-what about the dutch grind scene? how do you fit into it? which bands would you recommend?
A lot of quality in the Dutch grindcore scene. Most popular Dutch bands tend to lean towards more gore and metal influences as F.U.B.A.R. I think the Dutch grindcore fan has more appreciation for that kind of music, than the more punk/hardcore oriented bands. But we can’t complain at all. It’s good to play with Dutch bands. Always a good time.
As I said, a lot of good bands in Holland. My personal favorites are Blood I Bleed and Krush.

-what does grindcore means to you?
My interest in grindcore started when I was a teenager and thought music could not be fast enough. I loved the energy of grindcore / powerviolence and hardcore gave me.
A happy coincidence was I agreed with most of the lyrics all those bands where screaming.
Later on I got interested in other styles of music also. But my love for fast and aggressive music never died.
Also grindcore is the living proof of how underground music can have a very strong scene and be self sufficient. I love that. No need to interfere with the music business and their twisted fascination with money and fame.

-what's your opinion about the DIY ehics and actions?
I think my previous answer sais enough about my opinion of DIY. Pick up an instrument and go play some music.

-are you coming from a more punk or more metal background? how did you get into grind or extreme music in general?
Both actually. My love for blast beats and heavy guitars got me interested in grindcore. Before I knew what grindcore was I was listening to punk and metal. But when I saw Last days of humanity and Suppository play at a local bar. I forgot about that and started to listen to grindcore and hardcore. Funny coincidence I got to play in Suppository a few years later.
A lot of interesting music to listen to followed, during the years. But the more punk / hardcore oriented bands are is still my favorite grind bands.

-you are touring or planning a tour isn't it? I saw that Warfuck will play with you, what can you say about it?
Last time we played with Warfuck was great fun. And I love their album The weak and the wicked and live shows. So looking forward to go on tour with them.
I think the first shows are booked now. The tour will be in May and it will take us to Germany, Tsjech Republic, Poland, Italy, Hungary, France and more.
It has been to long sinds our last tour, can’t wait to jump in the van and go through Europe to make some noise once again.

-expect touring what can we expect from you in the coming months? more releases planned?
No new releases planed for the near future. I hope we will hit the studio end of 2013 or beginning of 2014. Expect some surprises on that recording. Think it will be a new full length. We really enjoyed making Lead us to war. So a new full length will definitely not take 6 years or more.
In the mean time, go and see us, when we are in the neighborhood. Playing live is what we love most.

-any final "full of wisdom" sentence to close the interview?
Start a grindcore band.
à 19:39