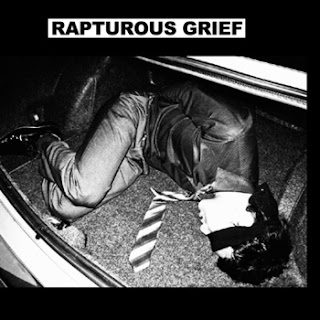 Rapturous grief is from Atlanta but sings in spanish. what they play is fastcore with a lot of blastbeats and with a riffing that is mostly punk but borders sometimes old school black metal. really good dark and agressive fastcore.

I think this 7'' released in october is one of their first release (they also did a few splits).

it's ten minutes of really cool grinding fastcore so if like me you're into that kind of stuff, just check it!

you can stream/download their record for free on their BC page.


their singer guitarist, Robert Sarabia, answered to my questions about his band, read it below :

-can you present briefly the band?

-was it a decision from the start to play as a duo?
Yea, we wanted to be a two piece and still like it but we talk about possibly adding a third member.

-do you play or have played in other bands?
Godsballs.bandcamp.com

-what about the self titled record you released recently?
It's a 7" only 200 pressed. There are two covers for the release so it'll be 100 and 100.

-why are you singing in spanish? is it because you're more easy with the spanish language or is it more a musical choice?
Kind of both. It's not easier, it is the same process for me to write in either Spanish or English. The lyrics have personal meaning so I thought it was appropriate since I am Hispanic. I might write a few songs in English too.

-I feel something like a black metal influence in the riffs, is it so?
We like black metal but its not a direct influence. I would say more metal than black metal. (Think Morbid Angel)

-which bands were important and influential for you on a musical or personnal level?
My personal influence comes from anywhere between Celtic frost to Jimmy Hendrix. I dont have a favorite band.


-you're currently touring the US east coast isn't it? what are your imrpessions?
Yes we are, it's been a great tour so far, great DIY shows done right and good people.

-are you looking for a record label or do you want to do it the DIY way?
We are not partial and don't mind either way. It is nice when a label can help you get records into different countries and you aren't paying for everything, but it also feels good that we do everything ourselves, we also print our own merch.

what's your favourite record for 2012?
Year One by Holly Hunt. It just came out but I've seen them live a few times and this record crushes.

-what is planned for Rapturous grief for the coming months?

We are going on tour with Shitstorm in February for 10 days, in the middle of the tour we will be playing a festival in Houston TX with Dropdead and Despise You. We may have a new tape by then.

-something to add?
Dennis, thank you for your interest in our band, we hope to meet you one day. I will definitely follow your blog and let people know about this site. Grind on!