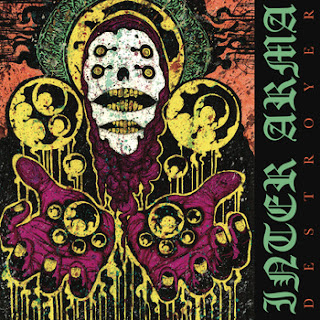 I found this band nearly by chance during one of my Bandcamp wandering. But not completely by chance, there was two reason I stopped at it and gave it a listen. First thing, the brilliant artwork, weird, dark, colourful and psychedelic. Then I saw that they were on Gilead media (the record label that has Thou in its catalogue). They just signed now to Relapse, I hope this will do them good.
OK. What about Inter-arma music?
It's quite good. A bit like a colliding of Mastodon and Enslaved. Mastodon for the heaviness and epicness. I mean early Mastodon. And Enslaved for the vocals and black metal meets psychedelia thing. It's not very close to Mastodon nor to Enslaved but you get the idea, it's heavy, sometimes melodic, sometimes heavily crushing. Their EP released this year called Destroyer has four songs. The first is a nearly ten minutes long heavy blackened and sludgy metal epic monster, with mid tempos parts, blast beats, solos, meats and potatoes. The second one is a short but interesting and good melodic instrumental, with a mix of acoustic and noisy riffing.  The third is instrumental for five minutes, quiet and a bit psychedelic, then the drumming starts and the guitar solo, and then it's an epic black metal song. And it's another good one. And the last song is more about slow heavy and hypnotic repetitive riffing through and through. So it's a really good record with a lot of diversity. It will be interesting to hear what will come next from them...

But for the moment check their EP on their BC page.

Their guitarist Trey answered to the questions I sent them about Inter-arma. Read it below :

-how did you form and how did the band evolved until now?

The band formed in late 2006. The only original member is TJ (drums). But we've been playing in as this exact lineup for about a year and most of us have been together for closer to 4 at this point. Joe (bass) is our most recent member. He joined up in I want to say February (maybe January) of 2012.


-what do you have to say about Destroyer? How were the songs written and recorded?

Well, the songs were written over a pretty significant period of time i.e. a year and a half or so. They didn't take that long to write, but we had a lot of material that we tossed around and by the time we got to recording them they had existed for a good chunk of time. TJ had the main riffs/progressions for "Destroyer" and "The Long Road Home", and I brought the main riffs for "Wailing Moon" to the table. We just jammed on them collectively until we were pretty happy with their composition. We recorded the EP almost as a demo with our friend Garrett Morris from Windhand. We did it all live over a weekend and then took our time mixing it and adding different things.
-I read that you had deals with different record labels like Gilead media or Toxic asset and that you signed with Relapse for your next record, what about it?

Yeah, we've worked with several different labels over the course of our being a band. We had a split 7" with Battlemaster that was released by Mirror Universe (Robotic Empire) before "Sundown" was released by Forcefield Records. We mailed a ton of copies of "Destroyer" to different labels just to see what happened and 20 Buck Spin passed it off to a friend (Toxic Assets) who offered to put out the EP on vinyl. Gilead Media is going to put out the CD version of the EP. We recorded a new record in March (2012) and were lucky enough to have Relapse approach us about putting out the newest record and future recordings through them.
-isn't your music a bit like doing your own mix of every styles in metal and playing it with something like "epic" intentions? (a silly question just to have you speak about how you see your music).

This is a question we get a lot. I don't think that we set out to play anything in particular. We kind of just write tunes and if they're cool then we keep playing them until we're happy with how they sound. We certainly haven't made it a goal to incorporate lots of styles or create our own thing. We're just eclectic guys who like playing heavy music.
-what's your favourite song on Destroyer and why? which one are you playing live?

I'm partial to "The Long Road Home" because I get to do my best David Gilmour impersonation, or at least an impersonation. We play all of the songs live excluding "Darker Movements".
-your lyrics are a bit spiritual and metaphorical aren't they? what ideas or images do you want to communicate through it?

Mike would answer this better, but I'll give it my best. I think that's a reasonable way to look at it. Themes range from dealing with loss, to hope and hopelessness, disgust, etc... "Destroyer" itself is about Robert Oppenheimer's ambivalent relationship to the atomic bomb. I'd recommend reading about that anyway as it's pretty interesting.
-how do you fit in the Richmond scene, do you see your music related to it?

I'd say everyone's environment affects their creativity in one way or the other so our music is irrevocably tied in with the Richmond community. I mean, we don't exactly sound like other bands around here, but we're friends with and play a lot of shows with good bands from the area. Their presence and music influences us, even if it's subconsciously, and I'm sure it's the same with them. -with Destroyer we have the impression that you can evolve in many different directions, what can we expect from your next record? Do you already have new songs?

There's definitely evolution from recording to recording, but the overall idea is pretty much the same. We try to write good heavy music that we like. The new record is fast, slow and mid-paced. It's loud and quiet. We did rerecord some songs off of "Destroyer" for the record as those songs had evolved some since we recorded the EP. We also have new songs that aren't even on the upcoming Relapse release. -you did a tour recently aren't you? a few words about it?

Yeah, we did a full US stint in September/October. It was rad. Mostly awesome shows all over the country. A few flubs, but that's to be expected. Overall it was awesome. Good people, a lot of good bands. Got to see some people we hadn't seen in a long time and meet some new folks. Tour is awesome even when it sucks.
-do European / French people have a chance to see you play in the coming times?

We're hoping to be out your way sometime in 2013. No specific details as of yet but stay tuned.

Probably "Honor Found In Decay", the new Neurosis. Honestly, though, there's not a lot that hit in 2012 that I liked a lot. I was and am still kind of bummed on the new Enslaved. Don't get me wrong, it's good, but it's not as good as I'd become accustomed to expecting from them.
-a joke to share or something to add?

I don't know enough jokes that are universally funny enough to share without their meaning getting lost in translation. Just watch Snow on tha Bluff and you'll understand our lives. 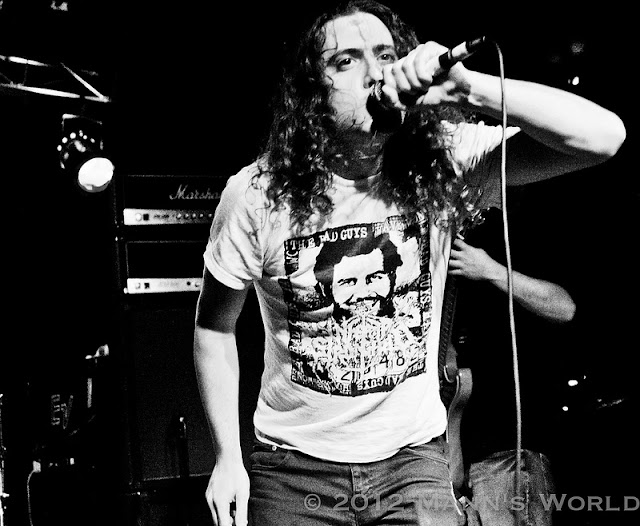 this photo of Inter-arma's singer is by Karen A.Mann. she's doing photos and reviews  /articles for different publications.  check her blog for some photos, news & reviews related to metal.