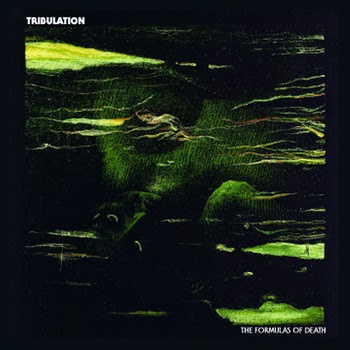 Formulas of death is the sophomore album by Tribulation (from Sweden). They are back with an excellent and ambitious album, more epic and progressive than their first one (this time it's released by Invictus productions). What they play is a smart mix of many old school metal styles. The vocals and some guitar and drumming parts are black metal (reminding the latest Immortal), you also have a NWOBHM meets thrash or punk elements that reminds me of the first Slayer records, or Entombed. And the progressive rock / black metal blending could relate them to Enslaved as well. It's quite fashionable nowadays to blend elements from different styles but few bands manages to do it as well as Tribulation does on Formulas of death. And I suppose that's why it ended on many "best record of the year list" for 2013 (including one of mine, see HERE). The other reason being that it is a really cool and enjoyable listen able to make headbang / air guitar any metalhead.

You can listen to it Here on Bandcamp.