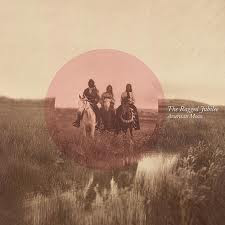 The ragged jubilee is a californian young band that plays a dark americana/rock. They mix with taste traditionnal instruments and rock electricity, their singer as a raw and warm voice, the overall feelings reminds of the good bands of the 70' like The Doors or The creedence cleawater revival, or, more recent, 16 horsepower. But they bring their own take of that style, and they do it with talent. Every song of their new album American moan, released in 2011, is good, with memorable melodies and atmosphere.
try it and you won't regret!

check their website, with their bio, videos, etc...
http://theraggedjubilee.com/


Ethan Burns their singer kindly accepted to answer to a few questions.
here it is :


-to start with can you give us about the formation of the band and about how it evolved until now? Why did you choose that band name?

-Well we formed under strange circumstances, My brother asked me to play a show for this cat I had never met named Chandler, he needed a band for some gig he was doing, so we played for this show and he finished his set early so I picked up his guitar and played a few songs, he liked my stuff and wanted to start a band claiming he knew the perfect drummer, then down the line I wanted an electric guitar player and knew this guy who was playing gospel music and played with a unique sound, and shortly after that I commissioned an organ player and had a group. The band name just came from what we sounded like really, but I don't think we ever talked about it.


-in what kind of band did you play before The ragged jubilee? where does your love of traditional American music comes from?

-I was in a folk trio with Zac Burns and Philip Wahl before. Well I grew up listening to blues so when I started writing my own songs they just went that direction I guess, but I never tried to sound a certain way or play any particular style.

-I guess musically you are influenced by blues, classic rock, country, what else? How would you describe your music? Do you listen to bands like Nick Cave & the bad seeds, 16 horsepower, or The gun club?

-Each member of the band is interested in a diverse mixture of genres. I don't think I could describe it to you. No I don't listen to any of those bands.

-I find that there's at times a dark, passionate, almost tragedy feel in your songs, do you agree?

-I agree that those feelings come through in some of the the songs.

-can you tell us about your lyrics?

-they're just what's in my head.

-I read several time people comparing your singing with Jim Morisson, I can see why but I feel it's a bit lazy and don't do justice to your own style of singing and voice. How do you take this comparison?

-I guess it's about as flattering as being compared to anyone else if your into that sort of thing, but people always have to put a label on you to define or categorize you so that they don't have to be creative or think too hard.

-who composes the music of the band, do you compose together at rehearsals or do you have one or different composers?

-Well I usually write the words, or sometimes chandler will, but we all compose our own parts just playing live.
-usually do you share the scene with rock bands, or blues/country/folk bands? Do you feel like being part of a scene of west coast bands playing a similar style of music?

-No not really. No I don't feel a part of any scene because I don't think that there is a scene.

-I read reports of your shows and it seems that usually it's quite intense, with an exchange developing between the public and the band, is it because you love playing and sharing your music? Is it also because the traditional side of your music helps people to understand and feel what you do?

-I think the intensity is just our natural way of interpreting the music.

-what are your projects for The ragged jubilee?

-We just finished our new album "In The Valley" that will be released april 6th, now we're working on our next record, and we are currently booking a european tour.

-which bands from your area do you recommend?

-what do you think of the Occupy movement? What's going on in your area?

- I don't think that question has anything to do with my music...but to answer your question I'm not interested in any "Movement".
-have you something to add?

-Thanks for your interest in The Ragged Jubilee