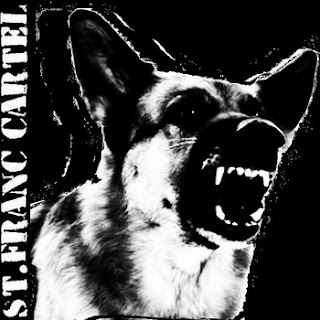 As far as I know this band doesn't exists no more. The guys doing that are now in Brighton's Dopefight (I'll tell you more about Dopefight soon I think).
Not used to speak about past bands, but since what the St.Franc Cartel played is quite original and really cool I 'll make an exception (and it works as an intro to Dopefight even if it's really different bands).

The St.Franc Cartel plays a kind of trashy/crossover old school hardcore with rap vocals. yeah rap vocals! it's a bit like the early Beastie boys, but sounding more like Minor threat or Suicidal tendencies but a harder, rawer and more pissed off version. As far as I know they just released a selt titled record in 2009.
just listen to it and you'll see :
here's the bandcamp page.
à 20:09