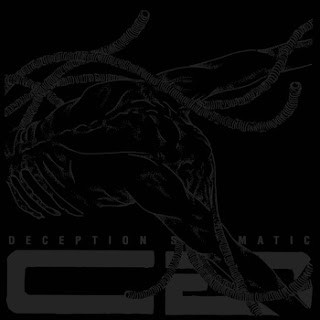 Deception Schematics by Cellgraft was for me one of the best 2011 discovories in Grindcore. Pure absolute devastating grindcore, musical intensity in its purest form. I just love that. the sound is really harsh and heavy, the guitar is really low and awesome, the songs are short and fast, the vocals are cool, and above all the rythms are really good (and that's the key for making good grindcore!).
Their other 2011 release, a split with Drainland is also really good (check  the BC page for the split).
a very good and special grindcore band!

for infos about downloading or buying their records, shows, link to their bandcamp, etc..check their blog. 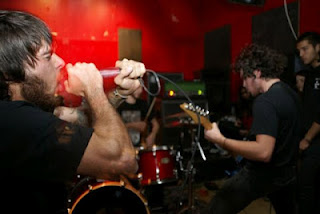 Their guitarist Ryan Zell kindly agreed to answer to some questions for Blasting days. Read it just below :

-can you present the band and its evolution from its formation up to now ?

Cellgraft started around 2009 out of the remnants of a prior death metal influenced band called Piles Sufferers. Starting out, I didn't know how to play guitar and Chris was just picking up how to play the genre on drums. Matt had been in a few punk and metal bands before but nothing major or too serious. The original goal was to make the guitars sound gross as fuck and push Chris to write crazier shit, which we haven't really strayed from I think. After playing a bunch of local shows over the past few years and, for me at least, actually learning how to play my instrument, we actually started to streamline our sound. Hopefully we can rise above being compared to the bands we're influenced by and actually create our own style. However, the Assuck and Insect Warfare comparisons are very flattering, haha.

-when we listen to Cellgraft we have an impression that the usual grind bands are a bit mellow and soft compared to Cellgraft, do you play such an intense and crushing music with Cellgraft because you think grind tends to be too mellow?

A lot of what we try to do is take the heaviest, grossest, most confusingly fast and pissed off sounding bands that we have heard and are influenced by and either put a spin on those elements or make them way more ridiculous. Honestly though if it's got blast beats and screaming and pissed off riffs I'll most likely love it. At live shows we usually try to play out of both bass and guitar full-stacks. Maybe because I personally feel like I have to fill in a sound gap because we're only a three piece or because it's something bands don't normally do all the time. Either way it sounds fucking awesome.

-what drives you to play such an intense music?

Not too sure. We always wonder if all this pent up aggression would have manifested itself in a different way if we didn't play grind. Even if hundreds of other bands might do it faster or louder or more technical, we will always play fast music. And always try to push the envelope as far as we can. It can obly get faster from here.

-the sound of Cellgraft gives me the impression of being partly influence by harsh noise, Japanese noise, things like that (and maybe by the sound of Pig destroyer on the other hand), do you agree? What are the elements that makes Cellgraft music ?

I used to be really into Hanatarashi and harsh noise in general. That and raw d-beat bands like Disclose. Over the top gain and feedback is always cool, haha. Matt and Chris are really into lo-fi black metal as well, so maybe the mixed influences of d-beat, noise, grind and black metal is what made us sound the way we do. We just really throw around ideas and new ways to run amps and see what happens.

-I know that you played with many really good grind bands, what was your best experiences?

-from your first recordings to Deceptions schematic and the split with Drainland your music got better and more personal, how do you describe the evolution? Where are you heading to for the next record?

Most of it is just plain learning how to play our instruments and becoming big equipment nerds. Me and the other dudes have been playing together for like four years so we can almost read each others minds at this point. Also, taking styles and sounds that are from different genres and shredding them up and putting our own spin on them always helps. We just finished a full length that's getting released through RSR. It sounds a lot different but I'll let everyone else be the judge on how.

-what do you have to say about the writing and recording of Deception schematics and the split wit Drainland? What did you try to achieve with these records?

On Deception Schematic I really wanted it to sound bass heavy and very sinister. It sounds like it was recorded in a cave with old huge amps. I always say it sounds like Electric Wizard playing grindcore, haha. The songs on the split with Drainland sound way different. Very straight forward, blown out thrashy guitar sound and loud as fuck snare. A lot of the way our recordings turn out is because it's always in a garage, or den, or living room or bedroom of whoever we can find that does recordings. I always liked the idea of changing up the sound from recording to recording while still keeping it grind and making necessary improvements as we go along. Hopefully our next record can live up to that gradual evolution. And if not, hopefully everyone likes the songs for what they are.

-I think one thing really important for grind is the rythms and the dynamic in the songs, and it’s one aspect I really likes in your songs, it adds a lot to the impact and the “catchiness and grooviness” of the songs. Is it something you focus a lot on when you write songs?

It's something that kind of happens on it's own I guess. I love catchy death metal groove parts and putting them in short intervals in between a grinding hell storm of noise always makes both sound way more effective to me. When we write though we usually aim for over the top and get that plus a few catchy moments here and there. If it was up to Matt and Chris i'm pretty sure all the songs would be straight blast beats through and through.

-what about the lyrics of the songs? What are the major themes?

A lot of what Matt writes about aren't the normal topics of most grindcore bands. He usually writes about what ever topics are prevalent or interesting in his life, whether that be philosophy themes, alchemy, conspiracy, or corruption. He never picks whole centralized themes for albums or a group of songs.

-in your blog we can read “shatter ignorance with harsh noise”. Sounds cool! How does it works?

That was kind of my own take on 'Death To False Grind' that got started by Insect Warfare. There are a lot of metalcore shit bands that think they play grindcore out there. Having these kids take one of my favorite things in the world  and morph it into some hipster garbage bullshit really pisses me off. This phrase is also directed to all ignorance no matter what it may be. People are fucked up and most of the time know it and I'd love to erase their ignorant hateful ways of life away with a mountain of amps and a wall of pissed off noise.

-what do you think of the situation in the US now,? what  about the “Occupy” movement?

Everyone is controlled by their daily lives and vices. While I'd love for there to be a massive change in the way the US, or the whole World, operates, I think we missed that chance a long time ago. The Occupy movement is an interesting one with so many aspects, especially with it being a global movement. Right now i'm just sitting and waiting and taking it all in.

-how is the grind/punk/metal scene in Florida, which bands from your area would you recommend?

It's actually coming back in a big way. A lot bands are coming through on tour now, bands are starting, side projects are starting from those bands. Some of the coolest ones right now are God Harvest, Flyingsnakes, Devout, Feral Babies, 440, Bastard Deceiver, Rotting Palms, Knife Hits, No Qualms, Ives, Vomikaust, Radiation and bunch more I can't remember at the moment. So many bands and so many good people. Florida rules right now.

A new record is on the way, as well as External Habitation being pressed on vinyl thanks to RSR. Also a repress of Deception Schematic on No Reprieve Records. We're in the middle of planning an east coast split tour with Bastard Deceiver who is also from Tampa this August. Next year we're trying to do both a West coast tour and European tour but will probably settle for just one of those.

thank you to everyone who has helped us out, bought records, downloaded our music and spread the word about us in any way. Without you we would just be nerds playing out of two many amps, haha.