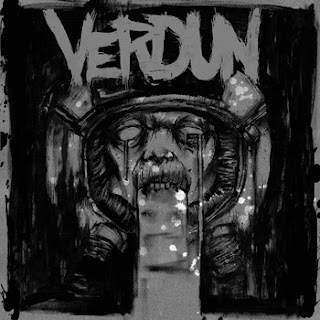 The cosmic escape of admiral Masuka EP is proof that Verdun is a very promising band. With their first record (released in 2011 in cd via Head records and in limited edition cassette via Throatruiner records) the band from Montpellier, France, offers a really heavy doom metal, with hardcore vocals, and some psychedelic elements. Their ability to write good songs and to create dark and trippy atmosphere guarantee that if you like this style of music you will appreciate their record.
Check it by yourself on their Bancamp page.

I met the guys of Verdun at the Mojomatic in Montpellier to ask them a few questions and share some beers with them.
here is the interview :

-to start with, can you present the band ?

Florian : back in 2010 I had some doom riffs in stock so I looked for some musicians to form a band to make something with these riffs. That was the start of Verdun. Geraud plays drums, Chris and Aurélien were on guitars, Dadoo sings. Mouffi who recorded the EP has now replaced Aurélien as guitarist. The idea with the EP was just to have a demo to help booking some shows, but two record labels happened to be interested to release it, Head records releasing it on CD and Throatruiner on cassette/tape.

-do some of you plays in other bands ?

-what about your EP The cosmic escape of Admiral Masuka ? is the title chosen as an evocation of the space/psychedelic side of the music ? and the artwork for the dark/spacey side ? how about the lyrics?

It started with the riffs I had in stock, and went to form a kind of sci-fi/metaphysical "concept album", the three songs telling a story, starting with a nuclear catastrophe, the second song being about the sole survivor, the admiral Masuka, the third one being about his cosmic quest for god. So yes the lyrics and the artwork are linked with the dark and psychedelic side of the music. Dadoo our singer, who is also (with Chris) a tattooer at Lowbrow tattoo drew the artwork and wrote the lyrics.

-how do you write the songs ?

Florian : the songs on the EP started with some of my riffs but now we write the music together at rehearsals, jamming, etc...
-How would you describe your music, what distinguish it from the music of other doom bands?

We don't especially try to sound different, but don't sound like traditionnal doom, we just play what we want, each member of the band bringing his own influences, for exemple Daddoo's hardcore vocals are not traditionnal doom vocals, etc..the result of this mix makes Verdun.

we'll try to keep the heaviness and catchiness of the riffs and also the psychedelic elements. The recording of the EP was really spontaneous, made in two days only. Maybe the next record will have less density, with maybe the addition of some Theremin parts or things like that.

-what feedbacks did you get after the release of the EP ?

We had very positive feedbacks, especially since it was meant to be just a demo at the start. We'll do 25 gigs for the first part of 2012, two labels released the EP and the reviews were either positive or really positive.

-what are your favorite doom bands ? which other musical styles do you listen to ?

The classics :  Candlemass, Electric wizard,  St Vitus, Pentagram, or Cough, Thou.
Each of us listen to different kinds of music, crust, hardcore, hard rock, garage, etc.,.

-Usually with what kind of band do you play? there's not so many doom band in France...

Yes not so many, so usually we play with hardcore bands, crust, stoner or sludge bands, rarely with strictly metal band.

-If you could choose any band, with which one would you tour?

Dadoo : or Pentagram
-your planned shows are all in France, have you played or will you play abroad?

-First the Lozère, then the world?

-Except the shows what are your projects?

Well, mostly the shows for the moment. Then maybe at the end of the year we'll record an LP, but we have to write the songs before that of course.

what have you done with your wrist?
[note from Blasting days : Florian just had a silly accident and broke his wrist. But I'm not gonna give you any more details...].
Dadoo : Are you doing it for the money?
How many chicks did you get because you play in Verdun?
Mouffi : Will Christian ever get down of his rainbow?