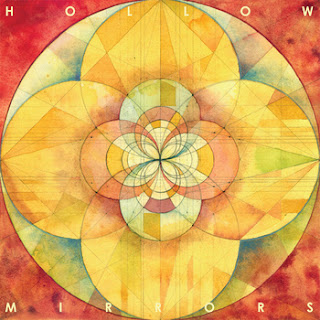 Hollow mirrors is a Frisco band and released in october 2011 a self titled record full of really high quality psychedelic rock . Don't know much more about them, but I know what's more important : their music is pure candy to the ears. The more I listen to it, the more I like it. Good rythmes, vibrations, trippy and quiet atmospheres, cool keyboards parts, good singing melodies, etc...to sum ip up, really pleasant psychedelic rock.
Don't fail to check it out on their bandcamp page.

I asked the band an interview to know more about it directly from themselves. They kindly agreed to answer my questions, so here it is :


-Can you present the band, what was the project at the start and how it evolved?

We are Tim Scammell (Bass, Vocals), Andrew Berg (Guitar, Organ, Vocals) Sam Foster (Drums, Vocals) and Bryce Shelton (Guitar, Vocals). In 2009, Tim, Sam and Bryce formed a new project out of the ashes of their previous band, Modig Wuht. The new project started as a mainly instrumental and improvisational 3-piece for a short time before Andrew came into the fold. When he joined, the improvisational aspect remained, but we then had a fourth member to complete the lineup and began to really develop our sound. This is also the period where we became "Hollow Mirrors”.

-what was the musical journey of the members of the band before forming Hollow mirrors?
The members of the band have a variety of backgrounds playing a variety of genres. Hollow Mirrors really came together around a mutual love for heavy spacerock, prog, psychedelia, krautrock and other related genres with a real driving rhythmic sound. Prior to playing together, we were friends and knew where our influences overlapped with each other. As the band started taking shape, we generally wanted to keep our sound in line with those influences while allowing a lot of creative freedom. We all had past experiences playing with bands that were somewhat bound by a genre and wanted to avoid that as much as possible with Hollow Mirrors. Generally speaking, we are big fans of most kinds of music and hope that our sound can evolve along with our tastes.
-how do you write the songs?

While some of our material is pre-written by individual members and then brought in to be hammered out as a band, most of our ideas stem from practice space jams. There is a strong aesthetic for improvisation with Hollow Mirrors and about 90% of our finished songs are formed this way. We also have the benefit of using a portable digital recorder during all our practices so that we can listen back to our improvs and flesh them out into coherent songs. This is usually a long process of constant tweaks and revisions, but the end result is rewarding in that we have a sound finely attuned to how we want it to be.

-I guess being from san Fransisco helps getting into and playing this kind of music, am I right?

Yes and no. While of course San Francisco is a wide melting pot of culture and definitely has its prominent history in psychedelia, it's not a guaranteed ticket to be in psych rock band. There are a baffling amount of different scenes in every type of music and all of them have scenes within the scenes. It can be rather confusing at times really, trying to network and gain attention outside of your own circles. But as an aesthetic, San Francisco (and in general the Bay Area) surely has a certain vibe to it that is like no other. We are still a very open-minded and creative community filled to the brim with thinkers, artists and musicians. So there's no shortage of stimulation.
Also where we live is quite scenic and and the natural beauty is as diverse as its inhabitants. If one was so inclined, they could get in there car and within a few hours drive you can go to the mountains, giant redwood forests, oak covered hills, dense urban areas, the beach, etc. So I think all of that seeps into our creative subconscious as well.

-with what kind of band are you playing with? How is the SF scene today?

Well to expound on the previous answer, it is a vast and immerse musical sprawl with every kind of scene (underground, medium ground, and mainstream all included) you could think of. Punks, metal heads, goths, hippies, nerds, club kids, the wide and deverse hip-hop scene, you name it. It's here.
Due to most of our members coming from a metal background, our upbringing has been heavily surrounded by the SF underground metal scene oddly enough. But the fact that the Bay is filled with so many open-mided individuals also means that even our metal heads are open-minded. Thus we have been embraced quite warmly by this community and have played a lot of shows with bands on the more metallic side of the spectrum. We are trying however, to branch out and find a wider audience while still keeping our initial audience intact.

-how would you describe your live performances?

Each Hollow Mirrors performance takes on a life of it's own. No two performances of the same song will really sound the same since so much of our improvisational aspect from the practice space comes through in our finished songs. We usually prepare a set for a show as early as we can so we can refine and nurture it until it holds up a strong, mostly-continuous piece of music. We build transitions into and out of songs and create jams in between songs specifically for live performances. Whatever the set is though, we try to maintain a level of relaxed-ness and not try to rush or overplay anything. We want to take to audience on a sonic ride that has valleys, peaks and pleasantly repetitive (and hopefully danceable) middle ground. Some sets play out better than other sets, but I think as we continue to grow and adapt, the more we gain a knack for getting it right.

-do you have an idea about how will sound your next record?

We are in pre-production right now for our second recording (on top of rehearsing our material for upcoming shows), which will be started in June of this year. While we have a lot of ideas and songs, nothing concrete has arisen yet as far as cohesive concept for the recording(though it wont be a "concept" album). The recording process for us is another creative expansion on what is already a heavily refined process. A lot of ideas sprout from within the recording process alone, that breath more color and life into the songs. Some of the material we will be recording is quite old (some dating from the time we were writing songs for our debut) and others are very new and will require more work to get them hammered out in time.
One thing about this new record that I can say is that I think it will be a good natural progression from the first album. It will still sound like us overall, but it will start bringing in other elements of our sound that people may not be aware of. More post-punk and dark atmospheric kind of stuff along with the more straight psych rock and kraut influences. We are really looking forward to it.

-what are your projects for the band ?

Well as stated before, we are preparing to record what will likely be our second full length album in June. We will probably shop the album around tat first o labels to see if any are interested in pressing and distributing the album. So if that all goes smoothly then it is likely we will have another album out this year. Aside from that we are still concerned with playing more live shows and seeking a wider audience. There have been talks of going on a small tour to the American Northwest, but at this point nothing is concrete.
-something to add in conclusion?

Thank you Blasting Days for the interest in our music and thanks to everyone who took time to read this!