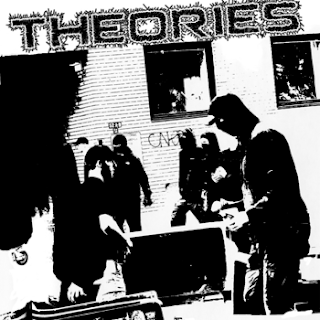 Theories is a promising new band from Seattle. They play a kind of Death metal/grind/crust combining power and heaviness with a bit of melody and a good sense of dynamics in the songs. If you're into heavy, fast and straight to your face music you should like it!

to listen to their music, check teir tour dates, etc,. go to their blog HERE.

And to learn more about Theories you can read Joe's and Rick's from Theories answers to a few questions I asked them. thanks a lot guys!


-can you present the band, what was the project at the start, how it evolved?

Joe : Blakes old band and my old band had played shows together in the past, we had talked about playing together for a while and about a year ago actually started writing some shit. The plan was to write some direct and to the point grind/metal. We figured we would write and slowly pick who we wanted to play with, lucky for us some of our closest friends are shredders so it was an easy choice with the additions of Rick, Kusha and Rob to round out Theories.

-why did you choose Theories as a bandname?

Joe : Blake and myself are both big into conspiracy theories and learning about the other side of the bullshit thats forced into the ears of people by the one sided/ corporate money influenced media. With that constantly on our minds and in our conversations and the idea that we wanted a non descript name that wouldnt be your typical metal band name, Theories, seemed perfect.

-I would describe your music as death metal with some elements more punkish/grind, do you agree? with what kind of band do you play usually? do you feel like being part of a scene?

Rick : Yeah, that sounds about right.  I think we've been heading in a more grindy direction, but there is definitely a lot of death metal influence in our music.  Since we try to blur those lines we've been able to play with a lot of bands from all over the spectrum from death metal to crust or hardcore, which is awesome.  There are a lot of bands playing right now, especially in Seattle, that blur genre lines which makes for a killer scene that we absolutely feel a part of.  Generally every show we've played has been well received and we've made a ton of friends on the road.  I feel like we're part of a pretty amazing scene right now.

-is Seattle a good place to play extreme music? are there many place where to play, many bands to play with?

Rick : Seattle is an amazing place to play etreme music.  There are a ton of awesome bands and the venues here are great.  The scene up here is absolutely thriving.  I wish I had time to name everyone.

-do you plan to tour Europe, are we good to be able to see you in France one day?

Joe : i havent toured europe since 2006, i am absolutely itching to get back out there asap!
Rick : Touring Europe is definitely a goal of ours.  Hopefully sooner rather than later.

-how would you describe the lyrics of your songs?

Rick: There are a couple of running lyrical themes.  First being (anti)political statements, war of western civilization and it's agents, etc...  The rest are just based on different experiences of mine, though I think I'd want people to interpret my lyrics on their own.  Some are pretty direct, the rest are a little more ambiguous.

-the tracks we can listen to on your Bandcamp will be part of an upcoming full-lenght record is that right? can you tell us more about this coming record? are you looking for a record label, or do you think you will release it all by yourself?

Joe: right now we are focusing on playing, writing and touring as much as possible. we will deal with recording the full length and releasing it when it comes.

-on the cover art of  your record we see a group of insurgents, do you identify with that or do you just use it as a symbol a radicalism/anger that goes well with your music?

Rick:  I definitely indentify with certain radical movements and it is something that I am involved with.  I wouldn't feel comfortable using images like that without it really meaning something.

-what do you think of the Occupy movement and of the situation in the US? what's going on in Seattle?

Joe: i have a hard time answering questions about politics, i get heated and usually write way more than can actually fit into an interview so ill leave these up to rick, but in brief, my only problem with the occupy movement is that nothing has ever and will ever change without absolute violence. in the past, present and future. i respect peaceful protests in the sense of raising awareness, but once enough people are aware the only way to make a change where the people who control the money control the world is by overthrowing through radical violence.

Rick:  Totally.  I've been involved with Occupy to a limited extent.  The major problem with Occupy is that, at least in Seattle, it involves middle-class liberals who try to insist on a commitment to non-violence which, honestly, never changed anything. When even a trash cans get thrown in the street or a bank window gets smashed they call it violent, having no idea of the violence banks and cops inflict on the rest of our society or the world in general daily.  We insist on a diversity of tactics and that includes violence if necessary. The up side is that out of the Occupy movement, it seems like the radical community has grown quite a bit. so things are definitely changing around here.

-do you think a movement carrying meaningful radicality can grow in the US?

Rick:  Absolutely.  Things aren't getting any better.  The movement and community in Seattle has grown a lot in the last 2 years or so, helped out by the Occupy movement recently.  We have a great bi-monthly Anarchist zine called Tides Of Flame and there have been a lot of actions recently.  If the rest of the country is anything like Seattle, we're definitely growing.

Rick:  We're all friends so we hang out, listen to music and whatnot.  We all go to shows pretty regularly.  I'm personally interested in radical politics and spend a lot of time focusing on that.  I'm very into spending time in the outdoors and trying to build primitive living skills so I can get by when society crumbles.  I watch a lot of bizarre/experimental movies too.  I really enjoy searching those out.

-what is your project for the band?

Joe: to keep grinding and touring our asses off


Rick:  I couldn't have said it better

Rick:  You can find us at facebook.com/theoriesgrind or download our demo at theories.bandcamp.com .  Thanks to everyone who came out on our most recent tour and all the rad bands we got to play with.  We had a blast.