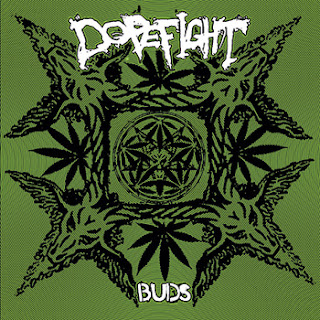 Buds, released by Dopefight in 2010, in two words : Heaviness and Groove. That's what Dopefight (from Brighton UK) is all about.
The songs on this first LP are quite original for a stoner/sludge band, some parts are bit more uptempo than usual, the riffs are catchy, the few more or less punkish vocals here and there don't do bad.
well, just make your own opinion by listening to it from their BC page.

(note : I reviewed their other, now defunct band The St Franc Cartel Here, different stuff but also really cool in my opinion).

And here is a written interview with Dopefight :

-can you present Dopefight and its music?

Dopefight are a Sludge band from Brighton, UK who formed in early 2009.

-you released Buds in 2010, can you tell us a few words about this record?

BUDS is our third release and our debut album. It's available on CD, Vinyl and Download.

-when will you release a new record, and how will it sound like, is there an evolution in your music since Buds?

Our fourth release comes out on monday 23/04/12, it's a split 7" with the awesome GURT!
There will be two new songs each and it's still fucking heavy!

-have you toured a lot after Buds, how was it? Which was your best gig?

There have been too many great gigs to pick a favourite but the dates we did with Hang The Bastard and Dead Existence were extremely fun!

-with which band would you like to tour with?

-what is the link between goat and leaf?

-It seems to me that the drumming in Dopefight is a bit different to the drumming of other stoner/sludge bands do you agree? How would you describe it?

The drumming never stays the same, it's more erratic and strays all over the place rather than keeping the same beat for ages.

-I know that some of you play or have played in other bands, can you tell us a few words about these bands?

-is Brighton a good place for rock/metal? which other bands from the Brighton area would you recommend?

Gnar Wolves, Enos, Sea Bastard, Little Ease, DKH, The Querelles. There are alot of great bands in Brighton but not that many Sludge/Stoner/Doom bands sadly.

-what have you planned for Dopefight in 2012? 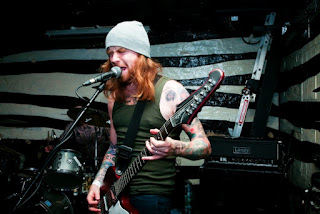